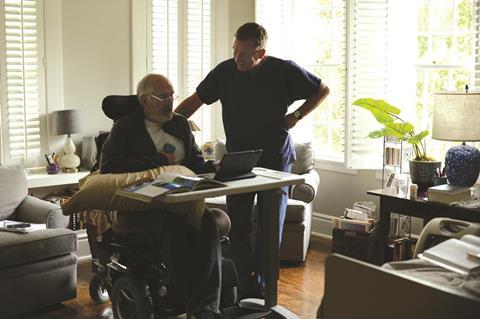 A pleasingly enigmatic character study, Chronic charts the complicated relationship between a Los Angeles nurse and his bedridden, gravely ill patients. Tim Roth gives a meticulously withdrawn performance that speaks volumes, and although filmmaker Michel Franco can be too fussy in his starkly somber design, Chronic is nonetheless a captivating work.

Franco examines the relative anonymity of caregivers like David who dwell on the border between life and death.

Playing in the Cannes competition, this barebones drama will benefit from Roth’s appeal at the art houses. However, that’s a low commercial ceiling, with the downbeat subject matter constituting an additional obstacle. Still, good reviews for Roth’s turn could build theatrical interest, and Chronic’s vague similarity to other stories of quiet loners, such as the far darker One Hour Photo, could help boost the movie’s profile.

Chronic follows David (Roth), who’s an at-home nurse for the terminally ill, assigned to one patient at a time. During the course of the film, David will care for three different patients, and we see that he’s intimately involved with their well-being. (He bathes them, spends time with them, and helps them in and out of bed.) But as soon becomes apparent, David’s attachment to these people can be unhealthy: He’ll adopt aspects of their personality or take on their interests. In one case, when a female patient dies, he tells strangers at a bar that he just lost his wife.

This discovery of David’s strangely close connection to his patients — compounded by his lack of a personal life — could have the potential to be supremely icky, pushing Chronic into becoming another portrait of a psychopath like a One Hour Photo. But Franco (After Lucia) eschews such heightened dramatic devices, incorporating a straightforward, naturalistic approach by keeping the camera at a distance and forgoing a score. Furthermore, Roth portrays David as an engaged, sympathetic, highly capable nurse whose patients come to rely on him, obfuscating our opinion of his behaviour. Is he someone who cares so much that he takes on his patients’ personalities? Or is there a deeper craving at play — a desire to feel like he has control and is needed?

Chronic lets those questions linger throughout the film, and the determinedly spare storytelling style pulls us into David’s threadbare existence, searching for clues into why he seems so cut off from the outside world. (One such hint arrives through the character’s quiet pursuit of a young woman, played by Sarah Sutherland, both online and in person.)

Franco’s Spartan approach can feel mannered, overemphasising David’s isolation, but all the while the filmmaker is subtly raising the stakes on his protagonist’s situation. A close relationship with one patient leads to a grave misunderstanding with the man’s family. And then David’s subsequent patient (a terrific Robin Bartlett), who’s going through chemotherapy, pushes back on his ostensibly selfless care, changing their dynamic in intriguing ways.

For a movie that surrenders character details only with great reluctance, Chronic relies on Roth’s strongly stoic yet heartfelt performance. David could be a pushy, stalker-ish creep, but the actor invests in the man’s sincere belief in the good he’s doing. And to be sure, David appears to be an attentive, considerate nurse. Chronic honours the man’s dedication to his craft — but the film also never stops wondering about the motivations driving him. Even at Chronic’s abrupt, seemingly arbitrary ending, Franco examines the relative anonymity of caregivers like David who dwell on the border between life and death.