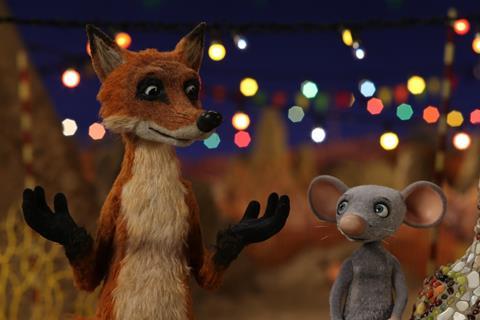 ‘Even Mice Belong In Heaven’

A wisp of a story about the unlikely friendship which develops in the animal afterlife between a boastful mouse and a reticent fox, Even Mice Belong In Heaven gains much of its appeal from its adorable character design and engaging blend of stop motion puppetry and 3D computer animation. The message of selflessness, generosity and loyalty is by-the-numbers stuff, but embellish it with moss, pinecones and twigs, and it takes on a certain magic.

The simplicity of the story notwithstanding, this is an ambitious and richly textured project

The film, which was adapted from a book by Iva Prochazkova, should enchant the younger end of the family audience; older, more animation-literate viewers will pick up on influences which range from stop motion pictures like Chicken Run and The Fantastic Mr Fox; to the predator prey conflict of Zootopia and even a nod to Ghibli (animal heaven has a water purification plant which bears remarkable similarities to the bathhouse basement in Spirited Away). The film’s evident, if undemanding, charm is backed up by the raft of sales in place already, to territories which include France, UK, Spain, Portugal and Scandinavia.

Whizzy the mouse is a show off with a tendency to overcompensate for the tragedy which marked her early life (shown in a whistlestop flashback near the start of the film). Whitebelly the fox cub is afflicted by a stutter and a natural gentleness and diffidence which is at odds with his role as a predator. When Whizzy tries to impress her friends by yanking a chunk of fur from the sleeping fox, a freak accident leads to both their deaths. Natural enemies on earth, the pair find themselves drawn together in heaven – literally, at one point, after an incident with a metal spring. Gradually the animosity between them fades, to be replaced by tolerance, and, eventually, a deep and genuine connection.

The simplicity of the story notwithstanding, this is an ambitious and richly textured project, with numerous characters and multiple intricately detailed sets including: a twinkling fairground; cascading hot springs (new arrivals to heaven are required to have a good scrub down, which is not popular with Whizzy, who hates to wash her ears); and a cinema auditorium housed within the intestines of a giant whale. It’s all realised with a satisfying earthiness and an organic quality – the natural world which was the home to the animals in life seeps into the afterlife, which is a lovely mess of curlicuing fronds and lichen quilting.

Visually, it’s an unqualified success, but the writing is a little less strong. More wit and less bickering might have made spending time in the company of the mouse and the fox more appealing from the outset. As it is, there are moments early on when you wish that Whitebelly would overcome his gentle nature and eat the damn mouse, if only to shut her up. And the fact that heavenly ascendence is structured like a video game, with a series of levels which must be completed, suggests that the younger audience is very much the target of this film. Still, stop motion buffs will likely see past the film’s shortcomings to be charmed by the craft of the film and its beguiling design.

Screenplay: Alice Nellis, Richard Malatinsky (based on a novel by Iva Prochazkova)