'One Floor Below': Review 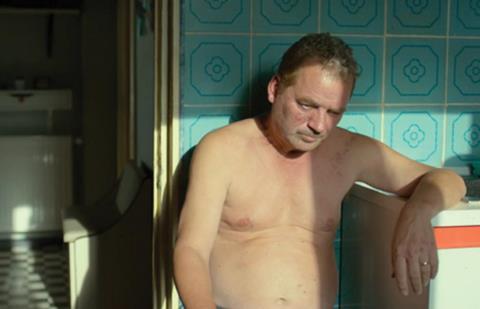 A slow-burn moral thriller, Romanian director Radu Muntean’s drama of accountability stars 12:08 East of Bucharest and Aferim! lynchpin Teodor Corban as a reluctant witness to a crime. This is no tight ethical drama in the mould of Four Months, Three Weeks, Two Days: some patience is demanded of audiences, especially in the plodding first half hour, when the protagonist’s frequent shirt changes are as arresting as his stalled character arc. But for those prepared to invest the time, One Floor Below quietly builds into a devastating portrait of a weak man and the weak society he represents, both of which have lost their moral compasses.

Distributors stirred by Muntean’s last feature, the simmering adultery drama Tuesday, After Christmas, should take a look at this Un Certain Regard contender, which makes up in thematic richness what it lacks in dramatic muscle – but it’s a niche player, even on already somewhat specialised ‘contemporary Romanian cinema’ shelf.

Corban plays Patrascu (that’s his surname, but it’s what most people – including his wife – seem to call him), a regular middle-aged guy who we see walking his dog in the park and jogging to take the edge of his looming paunch. He lives in an apartment block that could be in any lower-middle-class suburb of any European city, with a wife and adolescent son that he more or less gets on with. The film’s dramatic clock is set ticking when, on his way back from the dogwalk, Patrascu hears a loud and seemingly violent lover’s argument in a downstairs flat. He stops, listens, hesitates and carries on upstairs, followed soon after by the man we know to be the abusive partner, Vali – a well-cast Iulian Postelnicu, emanating hungry, needy, affable menace.

When it transpires that the young woman in the downstairs flat was murdered, Patrascu tells the police he heard nothing, saw nothing, noticed nothing. And back he goes to the job he shares with his wife – expediting vehicle matriculation and roadworthiness documents for drivers who don’t want to deal with the bureaucracy. He crashes queues, wanders into offices, calls in favours and grants them in return, advancing money to clients to pay licence fees and asking official mechanics if they can turn a blind eye to missing papers.

As IT expert Vali continues to inveigle himself creepily into Patrascu’s life, sorting out his son’s video-gaming issues, for example – an obscure form of blackmail, or bribery, which both men refuse to acknowledge as such – the tension is slowly racked up. But at the same time we begin to make connections between what Patrascu does and his strange moral inertia. He can’t stick to a diet, gets lost in a dog show, leaving his son to parade the mutt – and above all, he lives in a world of shortcuts, of favours and debts, of cash in hand and it’s-who-you-know.

In the end, the most impressive thing about One Floor Below is the way it toys with our naïve faith in a narrative of justice and the myth of the conflicted man who must eventually do the right thing. DoP Lucaciu uses shallow focus effectively as a metaphor for this society’s moral short-sightedness, and bright daylight shots as a counterpoint to the fog inside.