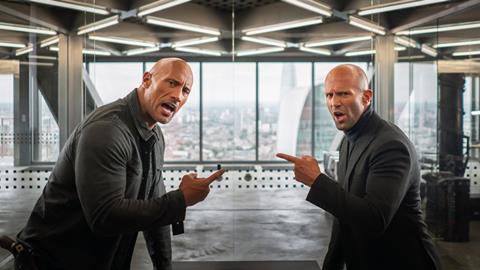 How the BFC supports film and TV production in the UK

With offices on both sides of the Atlantic, the British Film Commission can offer a broad range of support to incoming productions looking to shoot in the UK.

The UK may be in the midst of a prolonged film and TV production boom, with a film and high-end television production spend in the UK of more than £3.1bn in 2018, but the British Film Commission (BFC) still treats every single production it helps to shoot across the UK as a unique undertaking.

“We will tailor our help around what a project really needs,” says Samantha Perahia, the BFC’s head of production UK. “The way we’ve always tried to differentiate ourselves from other film commissions is to make the assistance we provide bespoke to each individual project.”

That is something with which Adam McCarthy, SVP, Physical Production at Universal Pictures, has first-hand experience. “[The BFC] are pros. They know exactly what we are looking for,” says McCarthy, who was taken on a whirlwind tour of Britain by Perahia in late 2017, when the studio was preparing to shoot Fast & Furious spin-off, Hobbs & Shaw. “We scouted all the stages and potential locations, from London to Belfast and Glasgow.”

Locations they visited included a nuclear power plant, and streets and roads in Glasgow that could double for London. McCarthy expresses his gratitude that the Commission were prepared to spend so much time with him in advance of shooting.

“[The BFC] are just a very efficient and positive conduit, he explains. “It’s not just about ‘look at pretty London, Belfast or Edinburgh.’ They get the nuts and bolts and understand the physical challenges we are going to have. A lot of that has to do with getting the right crew, making sure the right crew is available.

“We had a car chase scripted in London, but Glasgow presented enough of the aesthetic that could help us match London and obviously it is not as busy a city,” McCarthy continues of the eventual decision to shoot in Scotland.

Another attribute of the BFC is flexibility. High-end TV productions coming into the UK will often look for less traditional spaces in which they can shoot; converted warehouses or factories where they can get long-term leases and aren’t under pressure to dismantle their sets to make way for new clients. Perahia and her team can help them find such spaces and will also advise about when studio space is likely to be available.

“We are pretty much predicated on a schedule geared to a release date but [the BFC] can guide us,” McCarthy notes. “They know the big shows that are coming in and when they are going to wrap and when might be a good time to shoot in the UK. They are very knowledgeable.”

Indeed, the BFC can act as a matchmaker, introducing productions to agents and property developers who might sub-let them space. “We’ve found our relationships, especially around stage space, expanding massively into areas that wouldn’t traditionally be relationships held by a Film Commission,” Perahia explains, emphasising the close links BFC has forged with the heads of the UK’s screen agencies.

Perahia remembers one instance in which she was called on a Sunday by an exec who told her “‘we are flying into Edinburgh to see a VFX company we are working with. Is there any chance we can go and see the Pelamis Building [the huge industrial site in Leith that is increasingly prominent as a shooting space] at the same time?’” Perahia immediately called Brodie Pringle, Head of Screen Commission at Screen Scotland, and, within moments, the visit was arranged.

Of course, BFC support begins long before the filmmakers actually arrive in the UK. Over in Los Angeles, Kattie Kotok, the agency’s EVP of US production, is proselytising tirelessly on behalf of the UK as a prime destination for the US studios and leading independents.

Kotok explains that as “an English-speaking country that has the facilities, the crews and the tax incentive,” the UK is “the best possible option” for so many North American projects. She and her team are the first point of contact for executives, producers or agents looking for “initial advice” about the UK. “It’s not just for projects which seem like a no-brainer [for the UK], like a Downton Abbey or something of that variety, but also ones that don’t necessarily feel like a match on paper, but it may be that the UK could double for another European country or period New York.” Kotok also notes the advantages of a project coming to the UK for post-production and VFX, even if they’ve done the bulk of the shooting elsewhere.

When productions do begin shooting on UK soil, the BFC are on hand to help with even the most challenging of requests, from liaising with the UK Armed Forces for use of a Royal Air Force helicopter to getting special permission to film in central London during the Paralympic Marathon. Recent productions to have received such targeted BFC support include Morbius, Avenue 5 and Bond 25.

Another activity the Commission takes very seriously is providing “signposting” services around skills and training initiatives. With so much production activity, competition for crew is intense but the Commission can guide filmmakers toward training initiatives via partners including ScreenSkills, the Production Guild of Great Britain and BFI’s Future Film Skills Programme, as well as provide guidance on more established crew.

“We reverse engineer every film and high-end TV project that we are working on; we see the crew and facilities they’ve used, and we keep note of that,” Perahia explains. This means that the BFC knows exactly who has been working with US clients, from VFX facilities to catering companies. The BFC doesn’t recommend any individual companies but can provide its clients with an exhaustive list of who has done what before.

As a result of this broad support, an increasing number of international producers are looking to the BFC for help and guidance. This includes Mark Murdoch, producer of the Four Weddings And A Funeral television series produced by MGM Television and Universal Television.

“The BFC were a great support while we brought a series the scale of Four Weddings to London,” he says of the extensive assistance the production received, which included the funding and facilitation of a stage space recce, advice on the high-end tax relief and key crew availability, visa guidance and help with accommodation. “While filming at important London landmarks, or in sensitive locations, their knowledge of filming in the capital was a great resource.”