Reach For The Stars: How major productions like ‘Star Wars: The Rise Of Skywalker’ are boosting UK skills 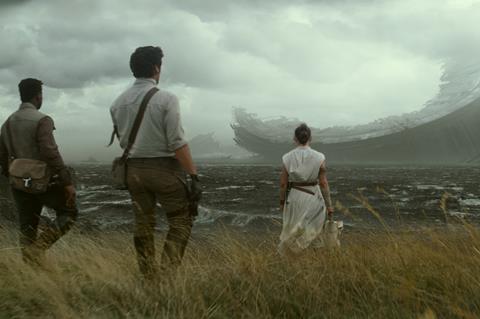 With Lucasfilm’s Star Wars: The Rise Of Skywalker looking set to thrill legions of fans across the globe this Christmas, it also cements the UK’s place as a world-leading production hub.

The blockbusting franchise has utilised the UK’s facilities, locations and talent for over four decades, and, when The Walt Disney Company acquired Lucasfilm Ltd in 2012, the franchise further rooted itself in UK soil by making Pinewood its permanent home

The British Film Commission (BFC) has played a crucial role in Lucasfilm’s investment in the UK, ever since they worked with the company and UK government in 2013 to secure the Star Wars franchise for the UK, and also assisted with the establishment of ILM’s London office. Since then, says Samantha Perahia, the BFC’s head of UK production, “the BFC has proudly provided support on all episodes of the Saga, from crew and stage space availability to UK wide industry introductions and troubleshooting.”

Alongside its studios and infrastructure, a major part of the UK’s offering to franchises like Star Wars is its extensive talent base, and strengthening and widening that base is now a key issue for the UK industry. Future Film Skills, the BFI action plan supported by industry leaders like Eon head Barbara Broccoli, Lucasfilm boss Kathleen Kennedy and producer and BFC Chairman, Iain Smith, launched in 2017 with a £20m BFI National Lottery investment. The plan aims to bring in the 10,000 new entrants needed in key craft areas to meet growing demand. ScreenSkills, the organisation responsible for investing in training and education for the screen industry at every career stage, was appointed to lead the delivery of this plan, and has funded and partnered on countless skills development initiatives since the launch.

Another key initiative in the UK’s skills ecosystem is the BFI’s Film Academy which offers opportunities to young people from anywhere in the UK and from any background to be part of the future film industry. This scheme provided an ideal opportunity for Lucasfilm, which was looking to expand its talent pool.

“Lucasfilm came to us and said that they were working hard to ensure that their productions were inclusive and representative both in terms of how they were casting, and their crews,” explains Ben Roberts, current BFI deputy CEO who becomes CEO from next year. “So we looked out our BFI Film Academy programme, which had been building up a pool of committed, highly talented young people from across the UK. We felt confident that if we went to that pool, we would be able to help Lucasfilm deliver on a training programme that would be incredibly diverse across all the departments where they wanted new blood.”

And with candidates being chosen from across the breadth of BFI Film Academy network, the programme’s focus on inclusion yielded immediate results; of the 28 trainees placed on Solo: A Star Wars Story, which shot at Pinewood in 2017, 75% were women, 45% came from BAME backgrounds and 68% were recruited from outside of London.

This is not, however, a mere box-ticking exercise. “Quality is our priority,” says Candice Campos, vice president of physical production, Lucasfilm, who are now placing trainees on two upcoming television shows which are shooting in the UK in 2020. “My personal experience was that there was always a bit of a stigma attached to any sort of diversity programmes. I wanted the crew to see that we were not just putting a group of diverse people in front of them to fill quotas; these were an elite group that were ambitious and wanted to work hard.

“We went to the BFI and said, ‘we want the cream of the crop from you,’” continues Campos; the studio interviews all of the selected candidates, with individual departments making the final picks. “Many times, these young people don’t know which path they want to be going down. You may have someone coming in thinking that they want to be in hair and makeup, but then they start talking about how interested they are in art and textures and we’ll say ‘maybe creatures [effects] is something for them’. We help guide that process.”

This ability to help trainees hone their interests, and also fill specific departments, is essential, as is the fact that the trainees stay on the production for as long as their department is in operation. “We realised that this shouldn’t be treated as a programme as such, it should be employment on an actual feature film,” says Campos.

“Working on Rise Of Skywalker was an amazing experience, as I was surrounded by the most talented people in the industry, who taught me many skills,” says 21-year-old props trainee Katie-Jo Watson, who successfully applied for the scheme after working on a short film with BFI Academy Newcastle and then attending a regional BFI course at the National Film And Television School (NFTS). “Being on set and in the props workshop is a real buzz, as everyone is working on different projects and deadlines are tight.”

Fellow trainee and aspiring producer Abdullah Khan, who was chosen for the scheme after taking part in the BFI Film Academy residential course at the NFTS and a weekend course at Pinewood, also found the experience to be hugely beneficial. “I was the video trainee on second unit, which involved setting up the video village for the heads of departments,” he says. “Being thrown in at the deep end is an understatement! But I got to experience first hand what it is like to work on a big scale production, and I also learnt the set etiquette which I will carry with me forever.”

“The most powerful thing about this programme is that it’s got sponsorship at the highest level, from the studios,” notes Roberts. “That meant that there was a commitment to ensuring that these trainees would be given real opportunities to learn with experienced production people, and they would also be given pastoral support and placed into an inclusive environment. Trainees are now entering the workforce directly from this programme.” Of the two cohorts of trainees who worked on Solo and Rise Of Skywalker, 96 percent of those who have finished shooting moved on to find work on a subsequent production within a matter of weeks.

“Training placement skills are so important as it gives an opportunity to gain experience and get their foot in the door,” acknowledges Watson, who also worked as a prop painter on Eon’s latest Bond instalment No Time To Die. “I’ve had so many amazing opportunities because of the people I met and the contacts I made. Without this training scheme, I would not be working in film now.”