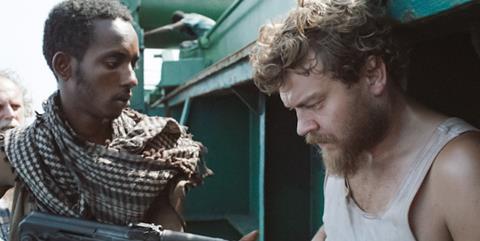 A tense and intricately shot drama, writer/director Tobias Lindholm’s solo debut feature is a powerful and intensely watchable film as it tackles the high-pressure negotiations over a hijacked ship, dwelling not just on those hijacked but also the team back at home trying to secure their release.

The film deftly balances the twin locations of the stifling often-claustrophobic ship alongside the plus Danish offices of the shipping company.

The film, which screened in the Orizzonti section of the Venice Film Festival, is a masterful exercise in building the tension, never resorting to quick dramatic tricks and keeping the tone appropriately serious as the clock keeps on ticking.

In fact Lindholm goes to great efforts to play down the more harrowing aspects of the story. The film opens with simple sequences of the ship’s cook Mikkel (Pilou Asbæk) going about his work and talking to his wife and daughter, but never actually shows the hijacking of the Rozen, a cargo ship in the Indian Ocean, instead skipping two days forward to see CEO Peter (Søren Malling) fist discover his company’s vessel has been hijacked.

Peter sees himself as a shrewd negotiator – we know this as a few hours before he receives the call he haggles with Japanese businessman to drive down a price – and decides to ignore the advice of the expert (real life maritime security professional Gary Skjoldmose Porter) brought on board to help handle the delicate negotiations.

Over the coming weeks Peter has to haggle with translator Omar (Abdihakin Asgar), while on board the Rozen Mikkel and his fellow shipmates have to try and deal with increasingly unpleasant circumstances as they are locked below decks and start to lose hope that they will ever escape alive.

The film deftly balances the twin locations of the stifling often-claustrophobic ship alongside the plus Danish offices of the shipping company. While the executives wear suits and ties as they try and force a deal the crew are grim, sweaty and always fear for the worst.

Pilou Asbæk (who starred in R) is moving and memorable as the genial chef whose sanity starts to crack, while equally fine is Søren Malling and the shrewd, calm and professional businessman who feels he must take responsibility for the situation, but is not fully prepared for haggling over men’s lives.