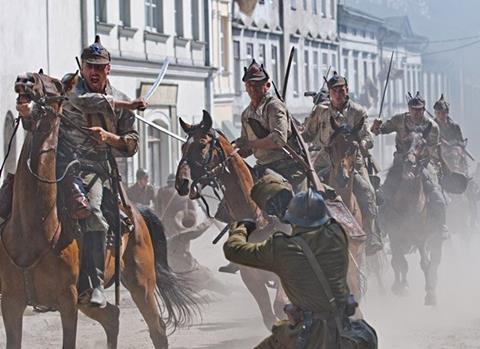 A little-known page of European history is brought spectacularly to life - and in unusually vivid 3-D - in The Battle Of Warsaw 1920, an elegant epic showing how the newly-independent Poland managed to beat the invading Red Army and stop the spread of Communism across the continent.

Well-paced, full of suspense and surprises, it delivers plenty of bangs for its $9m budget.

Veteran Oscar-nominee (for 1974 film The Deluge) Jerzy Hoffman marshals a cast of thousands likely to attract millions of cinemagoers on the home front, while the film has already secured UK distribution, with a 21-print release in Cineworld multiplexes from October 7.

Hoffman’s local blockbusters (such as With Fire And Sword), often based on novels, usually enjoy huge domestic success. but this time the subject is a real 20th century-event that, although considered one of the most important battles in world history, was subsequently wiped from public consciousness by the Soviets.

This was the only battle since the 17th century single-handedly fought by Poles, who obstructed the expansionist ambitions of Revolutionary Russia for 19 years, and arguably thwarted their aims of bringing Communism further into the West.

With welcome echoes of Cabaret, the film evokes the cosmopolitan flair of Warsaw after the First World War, and focuses on the romance between a (fictional) vaudeville singer Ola (the lovely Natasza Urbanska, shines, sings and dances too, in her first film lead) and Jan (played by the popular TV and film actor Boris Szyc). a dashing cavalry-man with leftist leadings. Their wedding day sees Jan called to help defend the Ukrainians from the expansionist Russians.

The production cleverly intersperses Polish screen stars as historical figures – including Michal Zebrowski, almost unrecognisable as the ineffectual Premier Grabski, and Daniel Olbrychski even more ferociously moustachioed as the bluff military genius Pilsudski - and the action alternates between the tribulations suffered by Jan (initially condemned by his fellows but redeemed when captured by the Bolsheviks) and scenes set in the Kremlin and the Belvedere (seat of the Polish government), while Ola’s musical numbers on stage in the capital reflect the changing fortunes of the campaign, using authentic melodies of the time.

Cinematographer  Slawomir Idziak (who shot Harry Potter And The Order of the Phoenix, and was Oscar-nominated for his work on Black Hawk Down) uses 3-D effectively and often wittily, (though some of the - mercifully brief- sequences of carnage in the trenches perhaps secured its 15 certificate for UK release).

There is unforced humour in a sub-plot involving an old officer with lecherous designs on Ola, separated from her missing, presumed dead, husband, and the film certainly does not flinch from portraying the rapacious tendencies of the Red Offensive.

Well-paced, full of suspense and surprises, it delivers plenty of bangs for its $9m budget. Appropriately, for a production that shows how the entire Polish population rallied to resist the Russians, the film was entirely financed and filmed in Poland, though Aleksandr Domogarov has a cameo as a kindly Cossack.