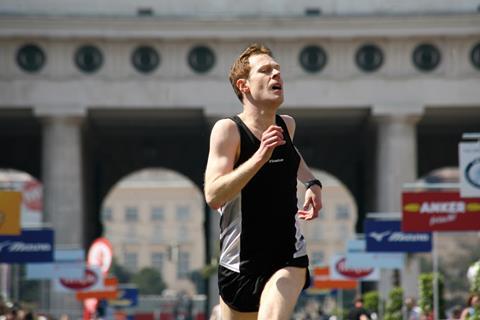 Even the most exciting story can look bland onscreen, if the script fails to probe behind the action. The Robber is based on true events – about an Austrian bank robber who was also a champion marathon runner – but suffers from director Benjamin Heisenberg’s failure to examine his protagonist’s motivations.

Lacking sufficient star power to motivate viewers outside its co-production territories, The Robber seems best suited to join the ranks of TV thrillers, unless a remake is touted.

After a long spell in prison for reasons unspecified,  Johann Rettenberg (Lust) is released on parole. As soon as he is back on the street, he indulges in his twin obsessions – long-distance running and holding up banks. He wins the Vienna marathon and becomes a celebrity of sorts; while the media mentions his past behind bars, people seem indifferent to his present. An old acquaintance Erika (Weisz) a social worker, invites him to share her flat and soon they become lovers.

Secretly, however, he dons a mask, steals cars, and breaks into banks single-handedly where he fills up large black plastic bags with money before making a run for it. This sequence is repeated to the point where it seems as if there is nothing easier to do in Austria than rob banks. The one time Hans is almost caught in the act, he makes a supposedly spectacular run for it, although the direction here is too indifferent to sustain interest.

One night Erika finds bags filled with money under his bed and when she can’t get him either to give up his criminal career or explain his acts, she asks him to leave.

Then, after winning another countryside marathon, he is repeatedly pestered by his parole officer for answers as to his whereabouts. Johann hits him over the head with his trophy and makes his escape through the fields. Chased and finally apprehended by the police with Erika’s help, he escapes once again, and the manhunt begins afresh.

The script, written by Heisenberg with the book’s author Martin Prinz,  presents the facts through the eyes of the lead character, Johann, and lets the audience imagine the rest. But Johann seems bereft of a past, a family, of anything that might connect him to this world. His relations with Erika are less than passionate and his face is mostly expressionless, whether wearing a mask or not. No effort is made to get any closer to him and since he can’t claim the sympathy of the audience, it is unlikely they will root for him. The movie thus becomes a case of waiting, patiently, until he is caught.

His running style is the best thing Andreas Lust has to offer this film, though quite possibly he wasn’t allowed to do more. Franziska Weisz also has a tough task in the light of scant information about her character as well.