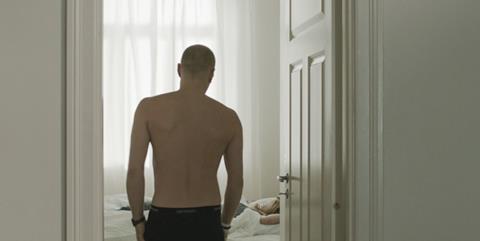 Life in these spaces is more cage than comfort in 90 Minutes, which makes you eager for more from a director with the courage to take on subjects that challenge the audience and the marketplace.

The second feature from Eva Sørhaug (2008’s Cold Lunch) will bring together feminists and admirers of courageous drama on the festival circuit, as well as those still incredulous at violence in such a prosperous society. Theatrical potential could be limited for this triptych of testosterone terror, but VOD access could help locate its audience. The composed, assured handling of such unsettling stories will also bring attention to its gifted director who doesn’t flinch as she forces you to do just that.

In each of three cool steely interiors, where everything seems to be in place besides an unscrewed male psyche, we see the last 90 minutes of a man’s life, but not before a woman becomes the first victim. 90 Minutes has an ominous discomfort in each of its three dramas, although Sørhaug doesn’t point you unambiguously toward where it’s going in the first half hour.

A respectable-looking executive ends a newspaper subscription before he prepares a last meal for himself and his wife.  A policeman visiting his children at the house where he once lives boils inside. A cokehead ties up and beats his companion as their new baby cries and cries.

Sørhaug, who wrote the script, creates a simmering inevitability once each of her dramas heats up, as details combust like twigs in a fire.  Filmgoers looking for logical character evolution or explanatory stories won’t get them in abundance here. Nor is 90 Minutes a roadmap for insight into last year’s mass murder that put Norway all over the news.

Sørhaug”s husband, Mads Ousdal - a Russell Crowe look-alike - in the role of a furious policeman,  gets closest to a crime evoking that killing, but there is never a suggestion that it offers any national truth-telling.

The cast of 90 Minutes brings together the same ensemble of well-known Norwegian actors that Solvaug directed in Cold Lunch, which could help make Norway one place where her film could have success theatrically.  In that team, Aksel Hennie is terrifying as a young addict with a hair-trigger fury, while Pia Tjelta exudes heartbreaking fatalism as the ex-wife who asks her policeman husband to leave his former home.

Life in these spaces is more cage than comfort in 90 Minutes, which makes you eager for more from a director with the courage to take on subjects that challenge the audience and the marketplace.