A Hitman’s Solitude Before The Shot 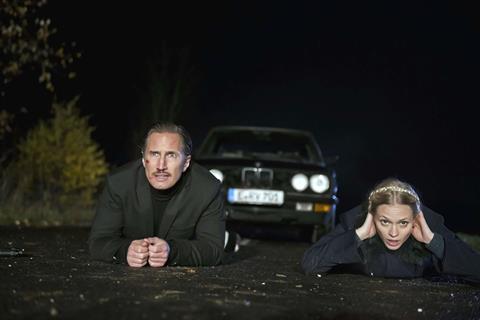 Though blessedly short and breezy and despite that fact that elements of this Bourne pastiche are genuinely amusing, the lumberingly titled A Hitman’s Solitude Before The Shot (Die Einsamkeit des Killers vor dem Schuss) is a one-joke film that just can’t get enough out of its joke to sustain a full-length feature film.

When the film is poking fun at elements of the Bourne films it works pretty well, and Furmann has just the right amount of pent up aggression for the frustrated Koralnik.

It isn’t for the sake of trying. Certainly Benno Furmann is excellent as the overly ambitious Euro hitman desperate for a mission and Mavie Horbiger is charmingly feisty as the woman who gets caught up in his mission, simply that there are times when it feels more like an extended television skit rather than a big-screen endeavour. Broadcasters could well embrace its Euro-sensibility and its sense of humour may appeal to other films festivals. It world premiered at the Locarno Film Festival.

Furrmann plays the square-jawed and mustachioed Koralnik, recruited as a contract killer for a secret EU programme (and told by his commander he is the best of the best), but after eight years he hasn’t been given a single mission, and it is starting to niggle at his strong-willed determination to keep his life secret, make no friends and never have a relationship.

Bored and frustrated, he nonetheless keeps living undercover as prescribed by the programme’s strict rules, but when he – inappropriately to be sure – meets up with another assassin from the scheme who tells him bitterly that he has been having four missions each year, he is pushed to the edge.

This coincides with his life is turned upside down when apparently shy Rosa (Mavie Horbiger) ‘accidentally’ crashes into his car. Gently pushy, she encourages him to invite her round for a pizza to discuss the damage, and he decides to finally accept her proposal. The scene is soon set for an engagingly amusing series of incidents – involving some drugs, a dash of duplicity, a stolen car, a toe being shot off and a show-down with police – as Koralnik finally gets the call he has been waiting for at exactly the wrong time in his buttoned-down life.

When the film is poking fun at elements of the Bourne films it works pretty well, and Furmann has just the right amount of pent up aggression for the frustrated Koralnik. Plus he is a pretty good physical comedian, especially amusing when his character has been fed drugs. Mavie Horbiger is excellent as the seemingly sweet-natured Rosa, with the complexities – and deviousness – of her character nicely developed. But try as it may, A Hitman’s Solitude Before The Shot remains an engaging spoof stretched out beyond its capacity to entertain, and while it does a good job with an apparently meager budget it could have done with more jokes and more plot.

But the title is a pretty memorable one – and has someone has already remarked, just in terms of title similarity it could make a nice double bill with Wim Wenders’ The Goalkeeper’s Fear Of The Penalty Kick.