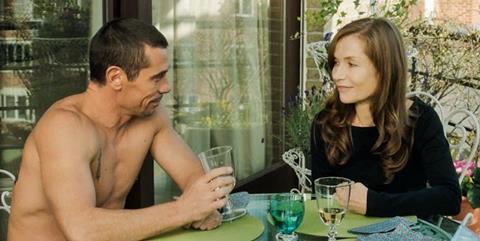 Catherine Breillat’s appetite for fearless self-examination has led her to court controversy throughout a long career. What surprises about Abuse Of Weakness (Abus De Faiblesse) is the straightforward approach she has taken to some of the most painful and baffling experiences of her life. Based on Breillat’s 2009 book, this is a considered, unsentimental attempt to understand the filmmaker’s seemingly inexplicable entanglement with a convicted con man.

Huppert is superb at capturing the physical impairment and mental anguish as Maud struggles with speech therapy and rehabilitation.

A fully committed performance from Isabelle Huppert captures the physical fragility and emotional vulnerability of the Breillat character and is likely to be one of the major factors in recommending the film to arthouse audiences who have loyally supported Breillat’s work over the decades. The muted, inconclusive nature of the enterprise may disappoint some and does leaves the impression that these intriguing true life events might have worked even better as a documentary.

Breillat suffered a major stroke in 2004 that left her close to death. In the film, imperious filmmaker Maud (Huppert) suffers a massive brain hemorrhage that leaves her paralysed on the left side. There are echoes of The Diving Bell And The Butterfly, as Maud is left trapped by an unreliable body and unable to cope with everyday demands without the support of others.

Huppert is superb at capturing the physical impairment and mental anguish as Maud struggles with speech therapy and rehabilitation. The film has a dry, almost antiseptic air as Breillat relives these experiences with the spartan hospital walls and gleaming white of the doctor’s gowns combining to blind the eye.

Eventually, Maud reaches a point of being able to contemplate a new project. After watching him on a television chat show, she impulsively decides to hire arrogant, boorish con man Vilko (Koll Shen) as her leading man. Vilko is notorious for having spent twelve years in prison and for showing little remorse for his past crimes.

She finds him intriguing and a friendship grows in which they recognise common traits in each other. When he asks her for money, she happily writes him a cheque.  As his demands increase, she seems content to keep on writing him cheques, eventually parting with a sum somewhere between 700 and 800,000 Euros. It is money that she will never see again.

The film never really concludes why Maud was so enthralled by the crooked Vilko. ” It was me, and it wasn’t me, ” is her response when her family tries to understand what had possessed her. Instead, it builds a picture of the energy and swagger that made Vilko seem so alive and therefore so beguiling to someone who constantly declares herself to be half-dead.

“I’ve sunk like the Titanic,” she forlornly suggests. French rapper Kool Shen brings a degree of charisma to the incorrigible Vilko, but it is Huppert who remains the star attraction in this pensive cinematic confessional.