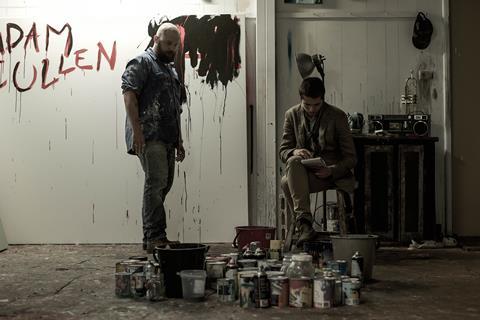 It’s easy to characterise Acute Misfortune as a bold, uncompromising character study of a bold, uncompromising artist; however nothing about this transfixing Australian feature earns such a simple description. Once the recipient of the country’s top portraiture prize for his likeness of David Wenham, the provocative painter Adam Cullen is now the recipient of a blistering, no-holds-barred cinematic portrait that, like his artwork, relentlessly flouts convention, inspires questions and courts a strong, complicated reaction.

Charting the tumultuous working relationship between the now-deceased Cullen and his biographer Erik Jensen over a four-year period, Acute Misfortune marks the directing debut of Top of the Lake and The Bridge actor Thomas M. Wright. It’s something akin to an interrogation — not just of its central figure, who is portrayed with ferocity by Snowtown’s Daniel Henshall, but of the very act of chronicling, worshipping and mythologising those in the public eye.

As ambitious as it sounds, the resulting feature stands out among both artist biopics and Australian cinema of late, brandishing a distinctive feel, a defiant streak and an almost abstract approach that’s all its own. Tonally, it boasts more in common with bleak genre pieces such as Chopper and the aforementioned Snowtown, and should continue to follow in their footsteps. While Cullen’s domestic acclaim gives the film local relevance after its Melbourne premiere, it’s a title that deserves an audience on the international festival circuit and beyond.

Adapted from Jensen’s non-fiction book of the same name by Wright and the journalist himself, Acute Misfortune dissects Jensen and Cullen’s encounters from their first meeting in 2008 to the artist’s death in 2012 at the age of 46. Despite its premise, the film never takes the shape of a standard discussion between the two, although they chat profusely — or, at least, Cullen does. Neither does it verge upon either celebration or condemnation, preferring to highlight its subject’s many contradictions: his applauded but controversial status, his need to create versus his destructive penchant for drugs and guns, and his antagonism for and reliance upon Jensen, who becomes his only friend.

Contradictions also abound in Jensen, as played by Toby Wallace (Galore, Boys in the Trees) with both the arrogance and uncertainty of youth. First seen dripping snark through a routine report about the grieving mother of an accident victim, Jensen oozes confidence when he’s sent to profile Cullen for the Sydney Morning Herald, but the bald, bearded artist imposes his might from the outset. Their initial studio tête-à-tête sparks a fierce monologue about human nature and Cullen’s childhood, then turns into an impromptu portraiture sitting. Jensen is apprehensive, not that he’s given a choice; “you’ll be the only fucking 19-year-old with an Adam Cullen on his wall, won’t you?” Cullen snarls.

It’s a more genial Cullen that later calls to enlist Jensen as his biographer, though theirs is hardly an affable friendship. Staying on and off at the artist’s remote Blue Mountains property, waking to find him naked in his doorway, tagging along on hunting trips and drug-scoring sprees, posing for photos and meeting each other’s families, Jensen is privy to Cullen at his best and worst. The journalist is lied to profusely about trivial details and cancer diagnoses alike. He’s shot in the leg and pushed off a motorcycle by his subject, too. He’s also there, pen furiously scribbling down shorthand, whether Cullen is trying to hide his extensive firearms collection, lying in hospital, or waxing nastily about freedom and notoriety in a heroin-induced haze.

In meticulous detail, Wright’s film scrutinises the give-and-take between interviewee and interviewer, as well as their respective roles and motivations in trying to turn a man into a myth. Astutely, the feature is literally framed as a portrait, peering at its two key figures through the Academy aspect ratio. It benefits from the accompanying sense of intimacy and demonstrates a fittingly honed-in focus; thanks to the perceptive work of cinematographers Germain McMicking (Berlin Syndrome) and Stefan Duscio’s (Upgrade), there’s nary a shot unburdened by a questioning gaze.

Elsewhere, editor Luca Cappelli (Strange Colours) imparts a unique rhythm with equal parts energy and patience, while the score by Evelyn Ida Morris conveys a similarly inimitable air. Each technical contribution has the feeling of an adroitly placed brushstroke contributing to a broader masterwork. However if any one aspect of Acute Misfortune embodies that notion, it’s the film’s core casting. Henshall and Wallace clash like the poles of magnets, yet each displays steeliness and vulnerability in their own ways. That Henshall emerges as the feature’s standout is a testament to his Snowtown-level intensity, in a performance and a movie worthy of that comparison.