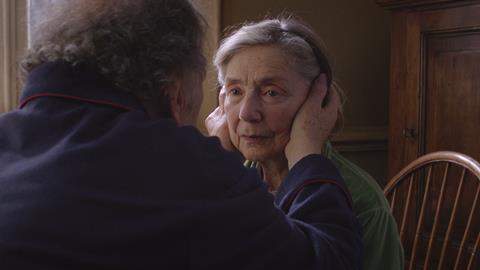 Old age remains the great taboo of cinema, with only a very few films daring to tackle the topic seriously ‹ among them, some true classics such as Tokyo Story and Make Way For Tomorrow. Amour is a more than worthy addition. As one expects from Michael Haneke, it is a sober, rigorous piece, and a magnificent collaboration with two veteran actors, Emmanuelle Riva and Jean-Louis Trintignant. It is true to say the pair give the performances of a lifetime, in that no other roles could possibly require them so directly to work with their own mortality and physical fragility. They rise formidably to the challenge.

This is a film of delicacy and immense force, and while it may well move you to tears, it is a hugely intelligent drama that tells it like it is about a subject most of us cannot bear to think about, especially on screen.

Haneke¹s absolute control makes the film intensely involving and quietly moving, rather than harrowing. Even so, getting audiences to see it will depend very much on Haneke¹s auteur prestige, and on the presence of Isabelle Huppert, here in very much a back-up capacity. But viewers will get an intensely rewarding masterpiece about a topic that ultimately concerns everyone.

Haneke begins with a forceful and unsettling prelude that tells us how the story will end, but that also wrongfoots us, since the tone of what follows is much gentler. The main characters, as ever in Haneke¹s films, are named George (Trintignant) and Anne (Riva). They are elderly musicians first seen attending a concert by pianist Alexandre Tharaud, who appears later apparently playing himself as Anne¹s former pupil.

Returning home, the couple find there has been an attempted break-in at their flat ‹ one of those small disturbances that carry powerful repercussions in Haneke¹s world. The next morning, Anne goes into a trance over breakfast - a quietly troubling scene that Haneke brilliantly hang on the seeming distraction of a tap left running. This is the start of her physical and mental decline, a passage Haneke sketches elliptically an effectively in a series of episodes. First, it is mentioned casually that Anne has had an unsuccessful operation. Then she is seen in a wheelchair, andsoon we realise she is paralysed on the right side of her body.

Much of what happens is not dramatised directly, but Haneke pulls no punches in depicting Anne¹s condition: increased immobility, dementia, incontinence and so on. Throughout, it is clear the couple¹s long-standing love is unshakeable, but the final stakes of that devotion are revealed in a powerful outcome, brilliantly handled by Trintignant.

More than in any of his other films, Haneke¹s theatrical background is visible in the measured, controlled staging - in that, rather than dramatise the couple¹s experience, he shows it to us, for this is a hyper-lucid demonstration of his theme. But this is also a magnificently directed actors’ film in which the two leads are challenged to confront their own mortality and follow its implications to the very limit. Riva in particular exposes herself fearlessly, recreating Anne¹s increasing lack of physical control; while Trintignant hints at the inner stresses that wrack George. The two actors create a marvellous sense of complicity and intimacy.

There is no trace of overstatement or sentiment. Huppert, as the couple¹s daughter Eva, lends typically strong support, and the film is shot with superbly understated spatial precision by Darius Khondji. This is a film of delicacy and immense force, and while it may well move you to tears, it is a hugely intelligent drama that tells it like it is about a subject most of us cannot bear to think about, especially on screen. It takes a director like Haneke to make us grateful we did.