And If We All Lived Together 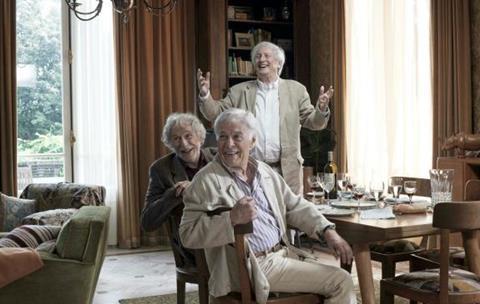 Made with lots of sympathy but insufficient perception to the third age, Stephane Robelin’s second feature may tickle the curiosity of older, mostly French, audiences, still familiar not only with the names of Jane Fonda and Geraldine Chaplin but also Pierre Richard, Claude Rich or Guy Bedos, whose presence on screen has been scarce, at best, in recent years.

Shot brightly, lavishly produced and briskly edited, the film plays like a summer romp, not to be taken seriously at any stage.

But treating them all as cute, charming but hopelessly useless old codgers may antagonise rather than win over mature spectators and put off the younger set who might not be terribly interested to begin with. Selected as the closing night on Locarno’s Piazza Grande, the best chances for And If We All Lived Together (Et si on vivait tous ensemble) are on television rather than theatrical.

The aforementioned quintet are playing five close friends, all of them in their seventies. Comfortably retired – money is not an issue all through the film – they spend much of their time together, indulging each other’s shortcomings, all results of their advanced age.

Jean (Bedos), revolutionary at heart but bourgeois by definition, is married to Annie (Chaplin), once a shrink now full time grandmother complaining she does not get to see her children and grandchildren often enough. Albert (Richard), sweet and nice but senile, is married with briskly energetic Jeanne, ex-university lecturer, who, as it is soon revealed, suffers from an unmentionable disease (no one pronounces the word cancer).

Claude, recently widowed, is an incurable womaniser who resorts, because of his age, to hookers in order to assuage his appetites. Walking too many flights of stairs up to visit one of those ladies of the night, he gets a heart attack, and his friends, who can’t stand the idea of seeing him in an old people’s home, decide to move together in Jean and Annie’s spacious house and bestow their loving care on each other. The one young man who joins them is Dirk (German actor Daniel Bruhl), first brought in to walk Albert’s hyperactive Afghan dog, and then staying to do a research on the custom of France’s aging population.

Though there is no single plot tying the entire package together, recurrent themes and motives are spread along the way and thrown episodically come in. For instance, do old people have sex; would a swimming pool attract Annie’s offspring to come more over to the house; could Viagra help solve Claude’s problems; did he ever entertain a relation with his friends’ wives; why can’t their children stop interfering with the lives of their parents and why does Dirk lives with a girl whose chest size is moderate when he actually prefers large breasts, and so on.

None of the five protagonists seem to have any real interest in the surrounding world and if they ever did have professions they had given up on them, long ago. No doubt many septuagenarians are like this, but even they would not fancy seeing themselves in this light. And frankly, if there are problems at this age - and there are plenty of them - they are far more painful, less pretty and certainly less picturesquely appeasing than they seem to be here.

Shot brightly, lavishly produced and briskly edited, the film plays like a summer romp not to be taken seriously at any stage, and is acted in the same spirit by a team of seasoned performers for whom such parts are at best an afterthought, Robelin’s film, despite its melancholy ending, rates mostly as an anecdote which can’t make up its mind what point it wishes to make.