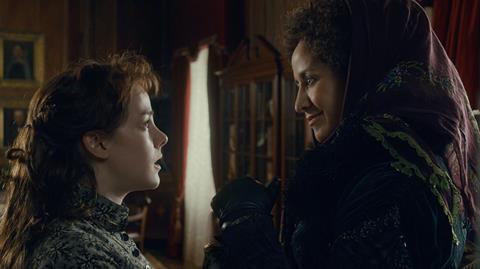 At first appearance Mitchell Lichtenstein’s Victorian London-set psychological drama looks to be a story of the paranormal, as eerie nocturnal happenings cause havoc to the domestic bliss of a well-to-do family. But there is more going on here than meets the eye and while there are elements of classic Victoriana horror, this is a film about sexual repression, frustrations and dark obsessions that fits into no simple genre bracket.

An unusual and often hauntingly strange film, Angelica is given life thanks to Jena Malone’s impressive performance, which juggles mounting hysteria with a gentle sense of passion.

Beautifully designed and shot (cinematography by Mike Leigh regular collaborator Dick Pope), Angelica is an intriguing and often unnerving film that borders close to being a tale of the supernatural, though at it core it is – quite simply – all about sex.

Writer/director Lichtenstein (who made the subversive Teeth) opens his story in intriguing style as the adult Angelica (Jena Malone), an actress, rushes to be at the bedside of her ill mother Constance (played as an older woman by Glynnis O’Connor), who is being tended by her loyal servant Nora (Tovah Feldshuh) and Constance’s spiritualist friend Anne Montague (Janet McTeer). Whispering to Angelica that she wants to tell her a story she has long held secret, the film then flashes back to when the young Constance (also played by Malone) first met the man who she would marry.

Innocent shopgirl Constance falls in love with Dr Joseph Barton (Ed Stoppard), a medial researcher and they are soon married. There enthusiasm for sex is curtailed when, after the life-threatening birth of their daughter Angelica, the puritanical doctors order abstinence for fear of Constance becoming seriously ill. Frustration and sexual obsession leads to her being fiercely protective of Angelica while also frustrated at her husband’s secrets.

One night she sees what appears to be a paranormal predator in Angelica’s room, and after more menacing visitations (they seem to look like floating germs) with the help of Nora, Constance sees help from spiritualist Anne Montague (McTeer, playing her wonderfully off-beat role with wide-eyed enthusiasm), who tries to clear the house of its terrors. But the arrival of Anne also acts as a wedge between Constance and her husband, and with Constance increasingly troubled by the visitations (which start to take on a sexual manifestation) the film heads towards a dark and bloody climax.

Sex and sexuality can often be seen as a subtext to Victorian novels, but Lichtenstein’s adaptation of the novel by Arthur Phillips, addresses repressed female sexuality in an intriguing fashion. Constance sees the apparition as a manifestation of her husband’s desires, but in truth it is her own desires, which she can never quite admit to, that produces something that haunts her. The fact that her husband is an early researcher in bacteria leads to the manifestation seeming like floating bacteria.

An unusual and often hauntingly strange film, Angelica is given life thanks to Jena Malone’s impressive performance, which juggles mounting hysteria with a gentle sense of passion. The film is elegantly put together, and while not an easy one to bracket its sheer of unworldly unusualness makes it worth taking a look at.