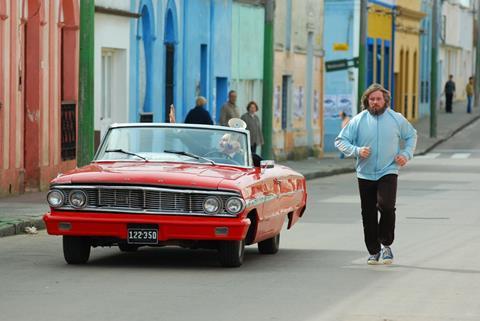 This attempt at deadpan satire, based on a short story by Juan Carlos Onetti , lacks the necessary pace, wit or humour to sustain its lofty ambitions – Bad Day To Go Fishing seems to sorely lacks the irony that made fellow Uruguayan film Whisky such an arthouse success a few years ago.

Gary Piquer, charged with carrying most of the film on his shoulders, is better at despondency and self-pity than he is at satire

The story concerns a two-bit impresario going under the name of Prince Orsini (Piquer) who, accompanied by a has-been, ageing wrestler named Jacob van Oppen (Ahola), descends upon a quiet Latin American town with the intention of fleecing the inhabitants, but finds himself the victim of his own scam instead. But both camera work and editing on Bad Day To Go Fishing seem uninspired and the result is not challenging enough for art houses nor attractive enough for mainstream distribution.

Prince Orsini is a middle-aged wheeler-dealer who considers himself to be a sharp player of people. He makes money by promoting the performances of former champion wrestler Jacob van Oppen, who is down on his luck, fond of the bottle and apparently also given to epileptic fits.

They move from one small Latin American town to another, promising a substantial award to any local willing to challenge the Champ. Needless to say, Orsini makes sure the potential opponent will go down in the ring for a fee and van Oppen’s reputation will not be tinted. But something happens in Santa Maria, “a hole in the middle of nowhere” to quote Orsini, to turn the tables on him.

The hall for the event is rented, the posters printed and put up all over town, and Jacob’s challenger has been paid to take the fall. Everything seems to be in place when the hired contender uses his payoff to drink himself into a stupor. A cheeky, insistent girl Adriana (Costa) demands that her fiancé wrestles van Oppen instead, and the champion himself is becoming more volatile by the moment.

It is easy to see how the basic plot could have been turned into a brilliant satirical piece. But in order to achieve that aim, the story needs more meat and a sharper direction. Gary Piquer, charged with carrying most of the film on his shoulders, is better at despondency and self-pity than he is at satire. Antonella Costa overplays her character’s toughness, while Ahola is never required to deliver more than a faint sketch of the past legend who still clings to a glory that is no longer his.