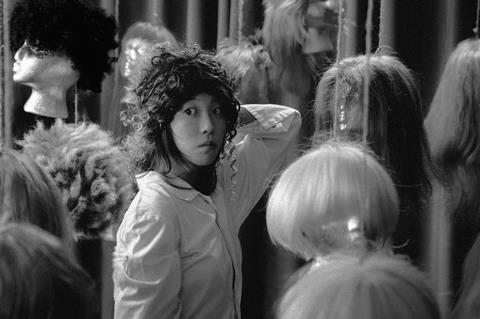 A young woman fleeing the pain of her recent past abandons her Tibetan pilgrimage in favour of a road trip with a stolen lobster in this cryptic cross-China odyssey. An episodic, oddball story which often seems to unfold in the hinterland between dreams and reality, this arresting but frequently confounding journey defies easy deconstruction, but is seeded with hints and clues. Audiences game enough to come along for the ride might not all end up at the same destination; this isn’t the kind of filmmaking which comes with a map.

There’s a loopy eccentricity to the feature debut from Queena Li which calls to mind the work of Guy Maddin at his quirkiest; likewise Li’s boldness when it comes to blending weighty emotional themes with moments of playful humour (a luridly coloured lobster’s-eye-view montage of the crustacean’s journey from the sea is a particular joy). Li’s idiosyncratic vision will likely find admirers in the contained environment of the festival circuit, but the film’s singular appeal might be diluted in the open waters of any other release.

The central character, played by the charismatic, androgynous singer-songwriter Leah Dou (who also contributes to the film’s score), is never named. Through fractured flash backs, we piece together a few facts: she is a musician, for example. She arrives in a swanky Lhasa hotel on her birthday. And there’s a beautiful, tortured boy (Kailang He) who haunts her memories, particularly in a recurring sequence in a deserted swimming pool. We assume that he is the reason that she has embarked on the journey, but nothing is explicitly stated.

Hidden behind a pair of repurposed swimming goggles, the girl has shut herself off from the rest of the world. But the plight of a lobster imprisoned in a tiny display tank at her hotel catches her attention. The creature is billed as a ‘Sacred Rainbow Lobster’. “People who see the lobster will be relieved of their pain,” explains the hostess, while simultaneously fending off a brash businessman who is determined to eat the creature.

Perhaps it’s the mention of pain – the girl evidently has no shortage of it – or due to a brief moment of affinity with the beast, but the following morning sees her driving south in a second hand taxi with the lobster in a bucket on the front seat. Her aim is to release it in the waters where it was captured, within the light of the Ming Island Lighthouse. But as with so many road movies, it is the journey, rather than the destination which is the point.

Shot in striking, high-contrast black-and-white widescreen, with occasional bursts of saturated psychedelic colour, the film makes effective use of the vast, bewildering vistas and the oppressive skies. It’s a landscape to get lost in. Along the way she encounters an eclectic collection of characters – a flamboyant wig salesman (a cameo from writer and director Khyentse Norbu) offers her a new identity; a boy monk quotes poetry; an American on horseback invites her to a feast; a pregnant girl cadges a lift.At one point, she releases a captive elephant.

Fluid, eddying storytelling and dreamy overlaid images all contribute to the sense that at least some of this is flowing through the woman’s subconscious. But perhaps it goes deeper. Perhaps she and the suicidal boy are one and the same; perhaps the razor she drops at a monastery ended her life at the beginning of the film; perhaps the journey is not to the ocean but to the afterlife. One way or another, the film manages to marshal its meandering threads into an ending which, in its own curious way, offers a sense of closure and release.