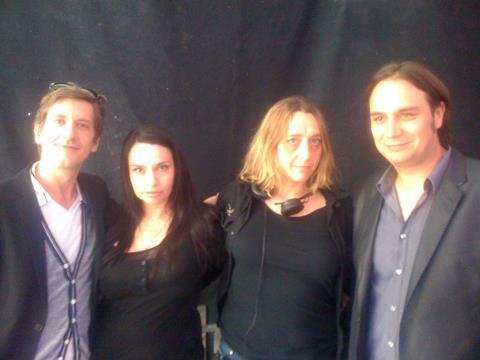 Bye Bye Blondie is French director Virginie Despentes’ second feature, following her controversial debut Baise Moi in 2000, which became the first film in France to be banned for 28 years and was only released after an outcry from anti-censorship campaigners.

Like Baise Moi, Bye Bye Blondie is a film adaptation of one of Despentes novels, and tells the story of a love affair between two women – an unemployed singleton living in Nancy and a married TV presenter in Paris – which is reignited after 25 years of being apart.

The film began life as a French production, with initial support from Vincent Maraval at Wild Bunch and the CNC, followed by Canal +. Struggling to find the whole budget in France, Red Star Cinema’s Cédric Walter called on Belgian producer Jean-Yves Roubin of Frakas Productions, whom he had been looking for an excuse to work with, to come on board as a co-producer.

“Wallimage Coproduction was the first partner who believed strongly in the project. Their support gave us the kick to start the financing in Belgium. We started to raise tax shelters with CineFinance. RTBF (Belgian Television) came in the project right after. Thanks to the great quality of the script, the movie got the support of the Centre du Cinema et de l’Audiovisuel de la Communauté française (Belgian CNC),” explains Roubin.

Roubin admits that, given Despentes’ reputation for controversy, it wasn’t an easy film to put together. “At the beginning, they [the financiers] were scared. After Baise-Moi, Virginie had this “censored reputation” and a lot of people had the wrong idea about her, saying it is impossible for her to make a movie without being controversial. Wrong…Virginie is the only director who could direct Bye Bye Blondie  for sure.”

“I don’t think Virginie would have made the movie, if it wasn’t Emmanuelle and Beatrice. There was no talk about it, it was just them,” explains Roubin, who describes the atmosphere on set as “ really relaxed, and gentle. “

“The person who looks after the extras said to me that it was the first time she had seen the director go through and shake the hands of the extras and say thanks a lot. She’s really close to everyone,” he adds.

Roubin describes the film as a “romantic comedy”, but, given its subject matter (a lesbian love affair!), will Despentes be displaying any of her Baise Moi shock tactics?

“Baise Moi was 10 years ago, and water has gone under the bridge. There will not be any scenes that could get into trouble with censorship and we are appealing to the public with this movie, with a big rock score and something for several generations.”

Next up: Roubin has two Belgium-French co-productions in the pipeline – Post Partum, a thriller by Delphine Noels (co-written with David Lambert) about PPD (postpartum depression) which it is co-produced by French production company Les Productions Balthazar (Jérôme Dopffer) and is currently at the casting stage, and a gay love story, Beyond the Walls, written and directed by David Lambert, which will see him reunite with Cedric Walter at Red Star Cinema. Roubin will be also be coproducing Walter’s next feature : Eric Forestier’s  I will kill the Princess, a thriller starring Emmanuelle Béart & Gaspard Ulliel.