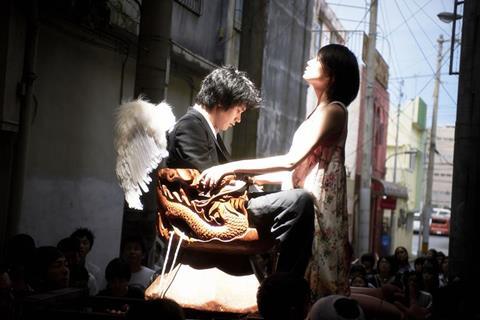 Taken seriously, a thing that not many are likely to do in the West, Sabu’s new film represents man’s revolt against the preordained fate that guides one’s life from birth to death. For the rest of the audiences, this looks like yet another one of Sabu’s action comedies, frenetic and colorful but not always adding up to anything more than an exotic, fast-paced stroll through present day Okinawa, the island which has been Sabu’s home in recent years. Too much local colour and excessive self-indulgence doesn’t help much either.

The cast does not appear to be affected by all the vagaries of the script, and for them it seems to be a souped-up action farce that they overplay quite happily.

Adapting his own novel to the screen, Sabu’s Chasuke’s Journey (Ten no Chasuke) follows a celestial tea-server, Chasuke (Ken’ichi Matsuyama), who fills up the cups of the script writers up in the heavens, all of them terribly busy writing down the fate of each individual on earth. This is of course a very complicated affair, for the fate of every person affects so many others in the course of one’s life, and these writers, each one in charge of a single person as his lead characters, have to coordinate between them, a process that sometimes leads to unpredictable results and generates conflicts between one writer and another.

When the destiny of one girl, Yuri (Ito Ohno), is thwarted by such a conflict and she is doomed to die in a traffic accident before her time, the scriptwriter in charge of her character asks Chasuke to descend down from heaven to earth and try to prevent Yuri’s early demise by any means he can find. His advantage being that, since he is not human, no scriptwriter is determining his moves enabling he can act as an unpredictable agent and interfere into predestined fates.

This is the beginning of a Heaven Can Wait type of adventure, with Chasuke dropping down in Okinawa, right in the middle of a ceremonial parade and having to find his bearings and grab Yuri out of the jaws of death. Some of the scriptwriters in the sky, willing to lend a helping hand, provide him with terrestrial help but there are others who will do anything to prevent his interference and dispatch their own agents to stop him.

This generates long chases, energetic rumbles, and parodies galore of the fanciful scripts invading every corner of the Japanese media, all of it ending into a kind of religious statement saying that if you live your life with strong positive intent, things can definitely be changed for better, whatever the fate you have been originally dealt.

How much the viewers will really care about this message remains to be seen. Sabu does his best to dissimulate it between the lines of a slapstick adventure, never paying too much attention to the mechanisms of a script that, on paper, offers countless pitfalls. Trying to make sense or find reasons for the various proceedings can only have confusing results. One of the film’s main features, Chasuke’s magical powers - enabling him to heal the sick and the invalid and also beating his adversaries, though each effort gradually drains him of his inner energy - seem to belong to a another film altogether.

The cast does not appear to be affected by all the vagaries of the script, and for them it seems to be a souped-up action farce that they overplay quite happily.  That is probably the best way to treat it.