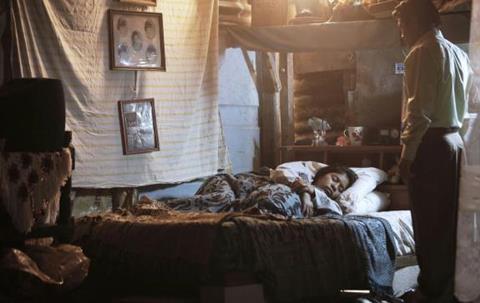 Done in a conventional manner, the story of a documentary film being made about victims who disappeared during the 1982 military conflict in Guatemala could fit nicely into the worldwide vogue of political cinema. Julio Hernandez Cordon, back for the third time in Locarno, chose however a different approach, turning a relatively simple, straightforward story, into a guessing game requiring the audiences to fill in plenty of black spaces and twisting it out of shape into an unnecessarily complicated and confusing item.

It is never very clear why the scenes are strung together the way they are, where the film will go next or why.

Juan, though married and father of a small baby, is desperate to find traces of the missing parent and constantly accuses his mother of not telling him the whole truth, and every once in a while attempts to commit suicide. Finally, after someone hints that the man who squealed on his father lives next door to him, he guesses it must be the porno-watching bus driver on the same street. He starts haunting the man’s son, finally taking his vengeance on the boy before trying once again to kill himself.

But Cordon would not allow events to deploy in such an orderly manner. Jumping back and forth, he follows Juan, madly obsessed with the hunt for the man responsible for his father’s death, Ignacio and Alejandra trying to mend a long-standing relationship which had been on the rocks for a while and Delfina, who dreams of going back to her native village, far away from all the troubles around her.

It is never very clear why the scenes are strung together the way they are, where the film will go next or why, and the hesitant introduction of the characters doesn’t help much to identify them or sympathise with them. To confuse matters even more, it is often difficult to understand Cordon’s choice of camera angles and his erratic pace that tends to draw attention away from his subject. No wonder none of the actors has a chance to develop a full scale character, or establish a clearly defined relation with the others.

With a long list of international funds providing support, and given the political subtext running all through it, referring to the past military scourges and present police brutality, it is most likely that Dust (Polvo) will find its way into more film events, but going further than that will require a massive effort on the part of its distributors.