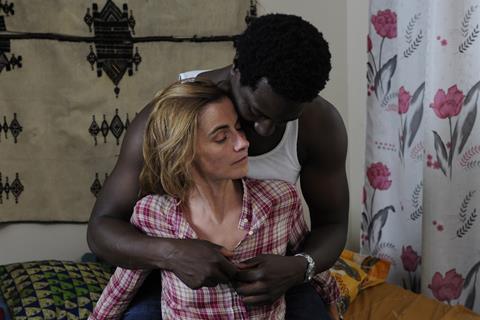 The traumas of internet dating, Parisian-style, are sketched in an over-familiar but sometimes bracingly crisp fashion in E-Love, a brittle female-angled third feature from Anne Villacèque. Veering awkwardly between light midlife-crisis comedy and darker psychological drama, the film finds its unity in a confident and sometimes bold performance by Anne Consigny, whose profile (Wild Grass, The Diving Bell And The Butterfly, Not Here To Be Loved) goes from strength to strength.

Wry social insights and strong appeal to mature female Francophile audiences should make for respectable sales although, at times, slightly too mainstream tenor may deter more art-skewed festivals. Heroine and narrator Paule (Consigny) is a 49-year-old philosophy teacher who has the perfect life - or thinks she does until husband Alex (Chappey) announces he needs his own space.

Before long, Paule spots him in the company of a much younger girlfriend. Eventually, Paule - emerging from a long-term depression of sorts - starts investigating online dating sites and finds herself spending time with a succession of unsuitable men, of whom the nadir is perhaps a narcissistic smoothie psychiatrist (Renko, giving a memorably cringe-inducing performance).

After a welcome tumble with an African lover, Paule finds a new burst of life as a born-again sexpot, but things go wrong when attentive North African lover Mounir (Kamoun) suddenly shows his nasty side - a clumsily-handled scene that many viewers will find uncomfortable, if not borderline racist.
A better bet seems to be smouldering, intelligent older man ‘Opale’ (Brandt), but despite a steamy date at a partner-swapping nightclub, he may not be the One either.

Finally, Villacèque and co-writer Sophie Fillières (known as a director in her own right) offer Paule an upbeat open ending, with a potentially life-changing visit to a François Truffaut film - with a Truffaut-style closing freeze frame into the bargain.

Taking a commercial detour after her last film, the darker-toned and artier Riviera, Villacèque has made an intelligent and often classy film, but overall a rather too familiar one, the filmic equivalent of an upmarket magazine article on ‘How We Love Today’.

Slipping between conventional comedy-drama vignettes and an awkwardly applied self-reflexive framework - with sometimes elegant fantasy sequences, and Paule repeatedly introducing herself in voice-over - the film never quite finds its feet stylistically.

What makes E-Love really watchable, however, is Consigny’s charismatic and hugely likeable performance, which mixes neurosis, wit, vulnerability and sometimes a strong eroticism, in several nude scenes which score a strong, feminist-inflected blow for the sexual power of the mature woman.

The male support cast are persuasively on the ball as a selection of crisply-sketched social types - including Eric Rohmer veteran Alain Libolt, and the grizzled, basso-voiced Brandt, who’s currently shaping up to be French art cinema’s favourite grey-haired matinee idol.