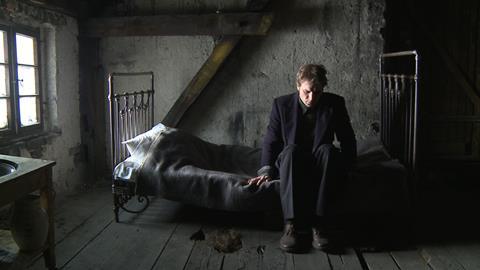 Expelled is an elegantly constricted, virtually silent, film that makes for intriguing viewing - at times amusing and at others frustrating - as it dwells on the existence of a single individual as he goes about his virtually solitary life, achieving little and doing pretty much nothing.

As an exercise in film language, director Adam Sikora shows a real skill in making something out of nothing.

But it is visually impressive, with scenes nicely staged and composed, and as expected with such a film the sound editing is spot-on. Inspired by Samuel Beckett’s prose, the film is intended to reflect the motifs from his stories Molloy, First Love and The End.

An unnamed man (played with a suitably sloop-shouldered gait by Krzysztof Siwczyk) wakes in a bleak building, is given food by some nuns and then ushered out of the room, pausing briefly to observe an amusingly obscured sexual dalliance between a nun and (presumably) priest….though the camera vision is deliberately obscured.

He rents a room in a building where he just lays down and sleeps, before being thrown out of that apartment as well. He makes home in a ramshackle empty house where he sleeps, before eventually opting to sleep on a bench. Here he meets a woman who is oddly drawn to him and takes him home. He eventually walks into the woods, finds an old rowboat which he drags to the river. He lies down in the boat to sleep, with the final scenes seeing it drift down the river, gradually sinking.

As an exercise in film language, director Adam Sikora shows a real skill in making something out of nothing, and it is oddly amusing to observe a man who offers nothing in his life. The sound effects work well – there are some moments of singing to make up for the lack of dialogue – and the silent frames are artfully composed.