11 breakout films from the summer festivals 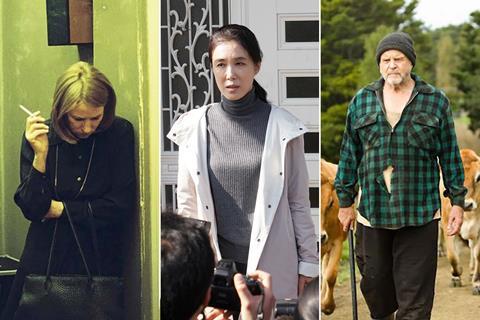 Between Cannes and Venice, a handful of smaller features from first and second-time directors are emerging from the summer festivals with strong word-of-mouth, picking up sales agents and looking set to pack their bags for the circuit.

Cat In The Wall (Bul-UK-Fr) - premiered at Locarno
Dir.  Vesela Kazakova, Mina Mileva
Logline:  South-East London, in the multicultural neighborhood of Peckham, in a municipal building. A Bulgarian family goes into serious conflict with their neighbors due to an abandoned cat.
Screen’s critical take: ”What’s particularly striking is the authenticity of British working class voices, something that UK cinema sometimes struggles to get right.”
Contact: Coccinelle

Bellbird (NZ) - premiered at Sydney
Dir. Hamish Bennett
Logline: A farmer and his son struggle to cope with loss on a small New Zealand dairy farm.
Screen’s critical take: “An assured feature debut in which viewers discover the gentle joys of an understated drama with an open heart and a lithe sense of humour.”
Contact: Lauren Valmadre, LevelK

Marona’s Fantastic Tale (Fr) - premiered at Annecy
Dir. Anca Damian
Logline: A dying dog looks back on a life filled with unconditional devotion to her passing owners.
Screen’s critical take: “Told with charm, wit and invention, this is family entertainment with an appeal that should cross the generations.”
Contact: Charades

Strange But True (UK) - premiered at Edinburgh
Dir: Rowan Athale
Logline: A woman claims to be pregnant by a man who died five years earlier.
Screen’s critical take:  “A cast with talent and name recognition to spare — including Margaret Qualley, Brian Cox, Amy Ryan, Blythe Danner and Greg Kinnear — will be key to the allure of Athale’s follow-up to The Rise.”
Contact: Bankside Films

Lara (Ger) - premiered at Munich, Karlovy Vary
Dir: Jan-Ole Gerster
Logline: A jealous mother struggles to cope with the prospect of her son’s success where she has failed.
Screen’s critical take: “Between the writing, the confident direction and the calm camerawork, we see a complex woman who is difficult and resolutely unsympathetic, and yet, we understand her. Some may even see the worst part of themselves reflected in her panicked, calculating eyes.”
Contact: Beta Cinema

A Bump Along The Way (UK) - premiered at Galway
Dir: Shelly Love
Logline: A rambunctious middle-aged single mother of an insecure teenage girl becomes pregnant by a man half her age.
Screen’s critical take: “What starts out as a low-budget, Derry-set broad comedy takes a poignant detour through the subtle and unsubtle bullying of women of all ages to emerge as a rewarding mother-daughter romance.”
Contact: Northern Ireland Screen

H Is For Happiness (Australia) - premiered at Melbourne
Dir: John Sheedy
Logline: A girl tries to fix her family’s problems in this sparky Aussie debut.
Screen’s critical take: “Finding its genial, quirky groove early on, this family film flirts with tweeness but ultimately bubbles with the same spark as its can-do protagonist.”
Contact: Lauren Valmadre, LevelK

Maternal (Arg-It) - premiered at Locarno
Dir: Maura Delpero
Logline: A young nun struggles with her maternal instincts in this debut feature set in a Buenos Aires refuge for unmarried mothers.
Screen’s critical take: “Its formidable stylistic control results in a film that is highly emotionally charged beneath its surface of detached austerity. Maternal is a cert both for festivals and upmarket arthouse acquisition.”
Contact: Charades