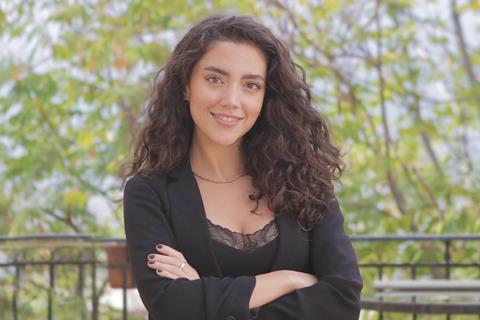 Actress and singer Stephanie Atala is one of Lebanon’s brightest rising stars at home and is soon to hit international screens in Hassiba Freiha and Kenton Oxley’s upcoming English- and Arabic-language psychological thriller Farah.

Atala still pinches herself about her recent trajectory. “As a child, I was very timid. If someone smiled at me, I would blush and walk away,” she explains. “I could never have imagined being on a stage in a theatre or on the set of a big production with people watching me.”

Her epiphany came while majoring in art direction at the Lebanese Academy of Fine Arts (ALBA), where she also minored in directing and acting as part of the course. “A student randomly asked whether I wanted to appear in their short film,” she recalls. “I was reticent but there was another part of me that really wanted to do it and I knew I would regret it if I didn’t. It was actually really fun and many other short films followed. The filmmaking community in Lebanon is relatively small and one thing led to another.”

Atala’s career took a big step up after popular Lebanese actor/director/playwright/composer Georges Khabbaz asked her to co-star opposite him in his hit stage musical Bel Kawalis. She played a star with a double life, during a six-month run across 2016-17. “It was a major turning point,” she says. “People were suddenly asking, ‘Who’s that girl?’”

The role also tapped into her talent as a singer, which began as a child in her local church choir. And Atala soon had a second opportunity to show off her twin talents in Lebanese-Canadian filmmaker Rachel Meguerdijian’s 2017 California-shot project In Circle, exploring a young woman’s personal battle to freely express herself, across a trilogy of music video-style shorts.

The actress is now poised to hit the big screen in early 2021 in two very different feature projects: the sci-fi thriller Farah and Lebanese director Elie Khalifé’s comedy portmanteau film State Of Agitation, revolving around a filmmaker who is brimming with too many ideas.

“Each idea is represented by a character. I play a character called Amal, which means hope,” says Atala.

Farah, which shot in Lebanon in late 2019 and early 2020, marks Atala’s first starring feature film role, and is also the feature debut of husband-and-wife team Oxley, who hails from the UK, and Freiha, who is of US and Lebanese descent.

Inspired by Freiha’s own experiences, it explores ideas of inherited trauma and mental health, with Atala playing a Lebanese medical student searching for the truth behind the disappearance of her mother many years before. This production has also tapped into Atala’s singing talents, with the actress recording a title track with UK musician Boy George.