Used to working on a big-budget cinematic canvas with the likes of The Bourne Identity and Edge Of Tomorrow, director Liman has made his first foray into virtual reality with groundbreaking project Invisible. 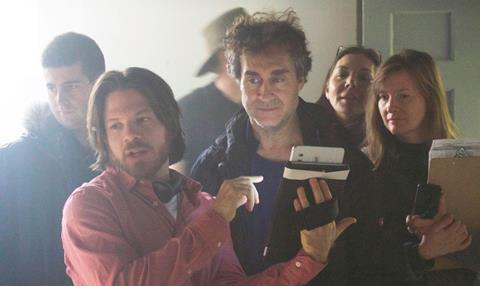 Big budget television has segued to the world of virtual reality (VR) by way of The Bourne Identity director Doug Liman.

Based around an influential New York dynasty whose power to make themselves invisible (and thereby control most of the world economy) is on the verge of being exposed, Invisible is a five-part supernatural drama series running at around six minutes per episode. Made in partnership with Condé Nast Entertainment (CNE), Jaunt and Samsung, the project is groundbreaking in its efforts to create a 360-degree VR action series that places emphasis on cinematic storytelling and production values.

“Nobody has done anything in this genre, and on this scale, within VR yet. We are chartering new territory, and we are all learning as we go,” said CNE president Dawn Ostroff. Formerly head of The CW Television Network, Ostroff moved to CNE in 2011 where she now oversees production of digital video, film and television programming spun off the publishing company’s editorial content.

In addition to a first-look deal with Twentieth Century Fox for its scripted television projects, the company oversees 4,000 videos annually as well as the mobile-first video channel The Scene. CNE’s inaugural feature The First Monday In May opened the 2016 Tribeca Film Festival, and its second film Army Of One is slated for release later this year. “The idea of immersing someone within a narrative storyline was intriguing,” said Ostroff, who says the roots of Invisible go back two years, when VR start-up Jaunt gave a presentation that included a 360-degree concert video of Paul McCartney.

After joining forces with Samsung and Jaunt, she met with several high-profile film-makers, ultimately deciding that Liman’s vision and slate of potential projects was the most innovative, particularly Invisible. “If I was still running the CW Network, this would be a series I would be interested in,” she said. “Just like a television series, I knew the story could hook viewers. It has conflict, emotion and cliff-hangers to entice viewers to keep watching.”

The Invisible crew filming with the Jaunt One camera.

But there were challenges along the way. “Creating a cinematic, action-series in VR was daunting,” said Ostroff. “Adding in special effects [VFX] and shooting on locations on top made it quite a challenging project that I don’t think any of us realised at the time.”

Liman’s digital company 30 Ninjas develops and produces interactive programming such as Live: Conan 360 Comic Con 2016 - a live-streamed VR broadcast – and Vogue 360: Fashion Week. Together with 30 Ninjas co-founder and Invisible producer Julina Tatlock, Liman brought in film talent to work on the new series, including screenwriter Melisa Wallack (Dallas Buyers Club), stunt coordinator and second unit director Simon Crane and editor Saar Klein (The Bourne Identity). For the creative team, it was, says the director, a version of VR film school where “anything and everything was tried and tested.”

Young film-makers Jerome Sable and Michael Litwak also joined the project, and co-directed with Liman throughout the shoot. “This is stuff you haven’t seen before,” said Liman. “Most smart film-makers avoid action altogether, not to mention in VR with VFX requirements. But I like starting something not knowing how to do it, and finishing with a complete understanding.”

Shooting over the course of a year, with final scenes completed in September, Liman and team tested out the waters both in VR storytelling and technology. “None of us knew what we were doing. It was truly a communal film school. But I knew what I didn’t want,” said Liman, who set out to break a few rules that other VR film-makers have followed, for instance moving cameras, editing within scenes, and use of close-ups. “I watched a lot of VR, and most of it was boring as shit. I am trying to do compelling, narrative storytelling. It has to be more fun and exciting. And you can’t do that without editing, without camera movement. Those were the rules going in.”

Invisible does not make its audience a character, but instead offers multiple storylines, giving viewers a guided opportunity to look where they want. “We are moving the camera along the trajectory that we have chosen, but there is more than one thing happening at the same time,” said Liman.

The film-maker admits he put Wallack through her paces, with continuous rewrites along the way. During production, he would have multiple headsets on hand, each relaying the different storylines taking place at the same time. “If you really want to embrace VR, the script is not going to look like a regular script,” said Liman, who also pointed out ‘emotional immersion’ was a topic continuously addressed, with both he and Wallack determined that their VR series should bring audiences closer to the characters, not further away.

The Invisible crew filming with the Jaunt One camera.

With Lexus on board as the sponsor, an undisclosed budget allowed for multiple shoots and reshoots and immersive location shooting. Shot with one main ‘hero’ camera – the Jaunt One, which is made specifically for stereoscopic 3D capture – as well as custom rigs utilising modified GoPro cameras with fisheye lenses, Liman strove to make Invisible as cinematic as possible. Filming took place from Haiti to the middle of Manhattan, drone cameras were deployed in Nantucket, a Jaunt camera was dangled off a Brooklyn rooftop six stories above ground and another time placed on a small remote-controlled vehicle and sent speeding down an alleyway. Liman pulled out all the stops, aiming to give audiences the most authentic viewing experience.

He likens it to shooting The Bourne Identity when he filmed Matt Damon in a car with a stunt driver dressed as Famke Janssen, driving through the streets of Paris at 80 miles per hour. “It was scary as hell,” says Liman. “I want to immerse people so they know what it’s like when you are in that car, so viewers are not passive.” Ostroff added that a focus was placed on being adventurous, with Jaunt adapting their cameras “on-the-go” subject to what was required for a scene.

Sound also played a major role. “Depending on where you look, you hear the different sounds and dialogues in different scenes,” says Ostroff. “Some of what we are doing goes above and beyond what you can currently watch, and beyond the ability of the player.”

Tom Vance, head of content at Jaunt, says that Invisible is, for now, the most technically advanced VR series both in its audio and visual capabilities. In the ever-growing world of VR, the content will be an increasingly crucial part in engaging and growing audiences. The VR company has raised a reported $100m in investment, some of that coming from Disney and Sky, and acts as both a production service and distribution outfit.

“We have a strong technology base, but we are also a distribution platform, and at the end of the day, we need strong content,” says Vance, who has eight other original VR projects in the works with both independent production companies and studios. “Invisible is not the end of the line – this is just the beginning. There will be a lot more serialised content, as well as individual experiences that will be longer in length.”

Jaunt is in preliminary discussions with Liman for a second series of Invisible, as well as another separate VR project. Asked about the monetisation of future VR programming, Ostroff said: “This is the first time in a while that the advertising community is excited. They want to be part of this experimentation process. It’s about what it means for their product too. It’s a brave new world, and we are excited to be a part of it.” (Other VR TV programming includes Halcyon, Syfy’s 15-part original whodunit series available on the Halcyon VR app, Samsung Gear VR and the Oculus Store.)

Invisible is available through Samsung VR and the Jaunt VR app on iOS, Android, Gear VR, Oculus Rift, HTC Vive and 360° viewing on major desktop browsers. It will soon also be available on CNE’s The Scene.