Foodie dramas, teenage girls in crisis, Kiyoshi Kurosawa’s latest and a documentary about Yukio Mishima are among the Japanese films tempting EFM buyers. 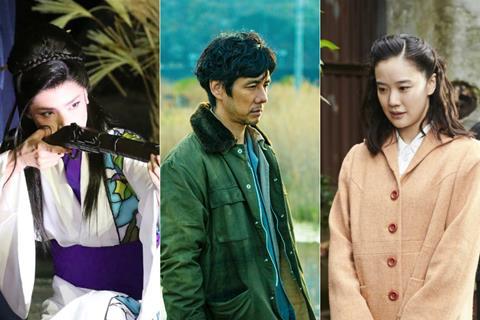 Voices In The Wind

Dir. Nobuhiro Suwa
Inspired by real events in Japan, Suwa’s drama follows a teenage girl who hitchhikes from her home in Hiroshima to Fukushima, the site of the 2011 Japan earthquake and tsunami in which she lost her brother and parents, to revisit the family home. Produced by Broadmedia Studios, this story of loss and an attempt at closure received positive reviews when it was released in Japan last month, with model Serena Motola, who plays the girl, praised for her performance opposite established actors Hidetoshi Nishijima and Toshiyuki Nishida. The film receives its international premiere in the Generation 14plus section.
Contact: Kaho Nakana, Open Sesame

Dir. Kazuhiro Soda
Screening in the Forum section following its world premiere at MoMA Doc Fortnight 2020, this cinema verité-style documentary follows mental health professional Dr Masatomo Yamamoto as he begins the process of retirement to take care of his ailing wife. Soda is an award-winning filmmaker renowned for his unique style of “observational film­making” in which he shoots without developing pre-conceived notions through research or scripts. He previously made a film about Dr Yamamoto, Mental (2008), which played at the Berlinale and won awards at the Busan and Dubai film festivals, while his last two films, Inland Sea (2018) and The Big House (2018), screened at the Berlinale in Forum and Critics’ Week respectively.
Contact: Maria Ruggieri, Asian Shadows

All The Things We Never Said

Dir. Yuya Ishii
Co-produced by Heaven Pictures (Hong Kong) and the Hong Kong International Film Festival Society, this Tokyo and Yokohama-set drama follows three high-school friends, now in their early thirties, as they struggle with relationships and pursue their dreams of becoming successful musicians. Nakano Taiga (Harmonium) and Wakaba Ryuya (A Beautiful Star) head the cast of the film, which is in the final stages of post-production. Ishii is known for award-winning dramas such as The Great Passage (2013) and The Tokyo Night Sky Is Always The Densest Shade Of Blue (2017), which screened in Berlin’s Forum section.
Contact: Pearl Chan, Good Move Media

Dir. Ryota Nakano
Rising director Nakano (Her Love Boils Bathwater) is working with leading producer Shinji Ogawa (Norwegian Wood) on this drama based on the life of photographer Masashi Asada. Following a successful series of photos featuring his family dressed up as the various occupations they once dreamed of becoming, Asada volunteered for an organisation that cleaned and returned photo albums lost in the earthquake and tsunami that hit northern Japan in 2011. Kazunari Ninomiya (Letters From Iwo Jima) and Satoshi Tsumabuki (The Assassin) head the cast of the film, which is scheduled for Japanese release on October 2.
Contact: Akihiro Takeda, Toho

The Brightest Roof In The Universe

Dir. Michihito Fujii
Kaya Kiyohara (Day And Night, Chihayafuru Part 3) stars in this fantasy drama, adapted from a novel by Tomoso Nonaka, about a teenage girl who feels a little lonely after learning her father will be having a new baby with her stepmother. Her only refuge is the rooftop of her calligraphy school, where she encounters an eccentric old woman and, despite herself, starts confiding in her about her problems. The film is in post-production for an autumn 2020 release. Fujii’s recent credits include The Journalist (2019), which was nominated for best director and screenplay at the Japan Academy Film Prize.
Contact: Etsuko Furutsuki, Kadokawa

Dirs. Masashi Ando, Masayuki Miyaji
Produced by leading anime studio Production IG, this animated feature is based on the novel of the same name by Nahoko Uehashi. The story follows a warrior who is captured and forced into slavery at a salt mine, where an attack by vicious mountain dogs results in a mysterious plague. Ando has worked as animation director on Spirited Away and Your Name, while co-director Miyaji has credits including TV series Attack On Titan and Xam’d: Lost Memories. The Deer King is in post-production for Japanese release on September 18.
Contact: Etsuko Furutsuki, Kadokawa (Asia); Mayumi Furuyama, Nippon TV (rest of world)

Dir. Yukihiko Tsutsumi
Keiko Kitagawa (Stolen Identity, Hero) stars in this mystery drama revolving around a psychologist who is asked to write a book about a college student who stabbed her father to death. While investigating the troubled young girl, the psychologist begins to sense similarities between the girl’s circumstances and her own past. The film, which is based on Rio Shimamoto’s award-winning novel of the same name, is in production for a 2021 release. Tsutsumi, who has credits including 12 Suicidal Teens and The House Where The Mermaid Sleeps, directs from a script by Taeko Asano (Birds Without Names).
Contact: Etsuko Furutsuki, Kadokawa

Dir. Kohei Yoshino
Currently in post, Yoshino’s debut feature is an original story about seven personalities sharing the same body, with each living on a different day of the week. The arrangement appears to be working until ‘Tuesday’ wakes up on a Wednesday and learns ‘Wednesday’ has disappeared. Tomoya Nakamura (The Blood Of Wolves, TV drama Downtown Rocket) heads the cast of the film, which is scheduled for Japanese release on May 15.
Contact: Emico Kawai, Nikkatsu

The Grapes Of Joy

Dir. Akio Yoshida
Scheduled for Japanese release in early summer, this foodie drama revolves around a young woman who works for a company that makes Japanese-style confectionaries and is assigned to assist in a vineyard that supplies grapes to the company. She meets the owner of the vineyard, who is determined to shut it down out of grief for his son who died 10 years earlier, and tries to convince him to continue running it and keep his son’s memory alive. Riko Fukumoto, who starred in hit TV series Secret Unrequited Love, heads the cast of the film along with veteran actor and director Naoto Takenaka.
Contact: Free Stone Productions 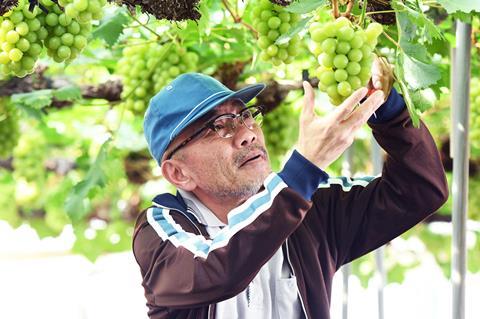 ‘The Grapes Of Joy’

Dir. Daigo Matsui
Seishiro Kato (Assassination Classroom) and Kotaro Daigo (The Battle: Roar To Victory) star in this coming-of-age sports drama that combines the lesser-known sport of handball with Japan’s social networking culture. Matsui’s credits include Wonderful World End (2015), a gay-themed comedy-fantasy about a teenage girl’s first crush, which screened in Berlin’s Generation 14plus, and most recently quirky romantic drama You, Your, Yours (2018). #HandballStrive is in post-production and scheduled for Japanese release on May 22.
Contact: Yasushi Miyamae, Colorbird

Josee, The Tiger And The Fish

Dir. Kotaro Tamura
Based on Seiko Tanabe’s short story of the same name (which was previously adapted as an award-winning live-action drama in 2003), this animated feature revolves around the relationship between a university student and a young girl who rarely leaves the house as she is unable to walk. Produced by animation studio Bones, the film marks the feature directing debut of Tamura, who directed TV series Noragami and was assistant director on Mamoru Hosoda’s Wolf Children.
Contact: Shion Komatsu, Shochiku (North & South America, Europe, in-flight); Etsuko Furutsuki, Kadokawa (Asia & Middle East)

Dir. Yoshihiro Fukagawa
Go Ayano (Rage) and Keiko Kitagawa (Stolen Identity) head the cast of this crime drama about two detectives investigating a doctor who euthanises patients with terminal illnesses after receiving their requests through the dark web. Scripted by Izumi Kawasaki (Pretty Proofreader), the film is in post-production for a Japanese release in November 2020. Fukagawa’s film credits include hit drama In His Chart (2011), which grossed $17m, Twilight: Saya In Sasara (2014) and Sagrada Reset Part 1 and Part 2 (both 2017).
Contact: Mayumi Furuyama, Nippon TV

Love Me, Love Me Not

Dirs. Takahiro Miki (live-action), Toshimasa Kuroyanagi (animation)
Based on Io Sakisaka’s popular ‘shojo’ manga, aimed at teenage girls, this dual-media romantic drama is being produced as separate animated and live-action features, each with its own ending and interpretation of the original work. It tells the story of two female and two male high-school students and their first crushes, complicated by real-world issues such as their parents’ divorce. A-1 Pictures (Sword Art Online) is producing the animated version, scheduled for Japanese release on May 29, while Minami Hamabe and Takumi Kitamura star in the live-action version, scheduled for August 14.
Contact: Akihiro Takeda, Toho

Dir. Haruki Kadokawa
Currently in post-production for an autumn release, this period foodie drama follows a young female chef who finds success by inventing a Kyoto-Edo fusion cuisine, but loses her restaurant in an arson attack. She rebuilds the diner with funding from a star courtesan, a huge fan of the restaurant’s dishes, who the chef later discovers is her estranged friend from a decade ago. Honoka Matsumoto, whose recent credits include My Father, The Bride (2019) and Chiwawa (2019), heads the cast.
Contact: Naoki Shinozaki, Toei

Dir. Keisuke Toyoshima
Scheduled for Japanese release on March 20, this documentary features restored footage of a famous debate between Yukio Mishima and students at Tokyo University, which took place during the mass political uprisings of the late 1960s. An internationally acclaimed author, poet, playwright, actor and film director, who was also an ardent right-wing nationalist, Mishima committed ritual suicide just one year on from the Tokyo University debate, after failing to inspire a Japanese military coup. The documentary features narration by Japanese actor Masahiro Higashide (Asako I & II).
Contact: Keiko Yoshida, Gaga Corp

Dir. Tatsushi Omori
Starring Masami Nagasawa (Our Little Sister) and marking the first feature of child actor Daiken Okudaira, this drama revolves around a young boy struggling with an alcoholic mother who forces him to extract money from his grandparents rather than making sure he attends school. Currently in post-production, the film is scheduled for Japanese release later this year. Omori is known for The Whispering Of The Gods (2005), which played at Locarno, and The Ravine Of Goodbye (2013), which won the jury prize at Moscow International Film Festival.
Contact: Keiko Yoshida, Gaga Corp

Dir. Hitoshi Yazaki
Takumi Kitamura (Let Me Eat Your Pancreas), Nana Komatsu (The World Of Kanako) and Ryo Yoshizawa (Kingdom) star in this drama, based on a bestselling novel about three siblings whose peaceful existence is shattered when the eldest brother encounters a tragic accident. Yazaki is known for poetic dramas such as March Comes In Like A Lion (1991) and Strawberry Shortcakes (2006), which won the special jury award at Barcelona Asian Film Festival. Sakura is screening at the EFM.
Contact: Shion Komatsu, Shochiku

Siren In The Shadows

Dirs. Takuji Izumi, Hidenori Inoue
Japan’s Village Inc is launching sales at EFM on the latest Geki Cine production, a filmed version of the hit stage-play of the same name, following its world premiere in competition at Sitges International Fantastic Film Festival last year. The story follows a roving geisha and deadly sharpshooter who is hired to carry out an assassination but discovers her target has an uncanny resemblance to somebody she once loved. Yuki Amami, known throughout Asia for TV dramas such as The Queen’s Classroom and Boss, heads the cast, which also includes Arata Furuta and Ryo Ryusei.
Contact: Hiroyuki Hata, Village Inc

Wife Of A Spy

Dir. Kiyoshi Kurosawa
Kurosawa’s first war drama, which he has filmed with 8K super hi-­vision, revolves around a merchant travelling before the outbreak of the Second World War who witnesses a barbarous act and decides to take action and reveal it to the world. His wife tries to stop him in order to ensure his personal safety and her own happiness. Starring Yu Aoi (Journey To The Shore), Wife Of A Spy is co-scripted by Kurosawa, Ryusuke Hamaguchi, whose Asako I & II played in Cannes’ Competition in 2018, and Tadashi Nohara, co-writer of Hamaguchi’s Happy Hour. The film is currently in post-production and is being readied for delivery in the second quarter of the year.
Contact: Emico Kawai, Nikkatsu