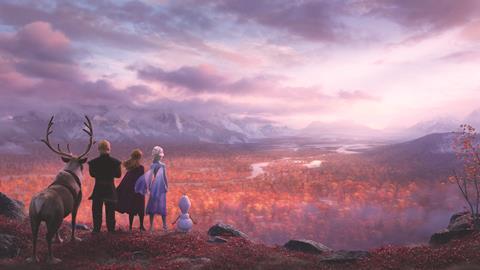 How the ‘Frozen II’ filmmakers dealt with the pressure: “we built it very honestly, from character out”

In Frozen II, a magical princess and friends must battle the elements of earth, fire, air and water in an enchanted forest. Screen talks to the filmmaking team about their own challenge in making a sequel to the biggest animated hit of all time.

Making a sequel to Frozen, Walt Disney Animation Studios’ smash hit 2013 musical fantasy, inevitably involved some pressure. The original, after all, won the best animated feature Oscar and took $1.27bn worldwide, becoming the highest-grossing animated film ever (a title it still holds unless, as some sources do, you count this year’s CG remake of The Lion King as animation). It also produced an avalanche of merchandise sales, spawned a Broadway stage show and inspired countless YouTube clips of princess-costumed fans covering the film’s anthemic song ‘Let It Go’.

But when they began work on Frozen II, co-directors Jennifer Lee and Chris Buck and producer Peter Del Vecho, all reprising their roles from the original, had a way to cope with the pressure. “We made a pact that we were going to keep that pressure out of the room,” says Lee. “Because we didn’t have that when we built the first one, so we built it very honestly, from character out.”

The pact helped Lee, who also wrote both films’ screenplays, and Buck, who has story credits on both, plus several other writers come up with what Buck sees as a continuation of the original “as opposed to just another adventure with our characters. It’s letting our characters grow up. They’re maturing, finding out who they are and where they belong.”

In the sequel’s new mix of fairytale and mythology, magically empowered queen Elsa (voiced again by Idina Menzel), her unflappable sister Anna (Kristen Bell), snowman Olaf (Josh Gad), mountain man Kristoff (Jonathan Groff) and his reindeer Sven are living happily together in the palace of Arendelle until a mysterious siren leads them to an enchanted forest. The magical events that unfold there give the characters answers to some of the first film’s mysteries ― among them the origin of Elsa’s powers ― and provide the sequel with some eye-catching fan­tasy action sequences.

One thing the sequel does not do is give Elsa a girlfriend, something suggested to the filmmakers via Twitter by fans who appreciated the original’s enlightened take on female characters. Says Lee: “We can do any kind of character, but with Elsa we were really looking at where she is in her life and the pressure she feels carrying the weight of the world. We weren’t focusing on romantic love.”

Original songs by Kristen Anderson-Lopez and Robert Lopez were a big part of the first film’s success ― with ‘Let It Go’ itself winning an Oscar, as well as a Grammy ― and for the sequel, the same songwriting team delivered seven new numbers.

In animation, says Lee, songs are “a great way to open up a character, to really propel the story forward. The songs evolve as the story evolves and the songwriters find pages they want to turn into song. It’s exciting when they see so much they want to musicalise.”

And whereas in the first film the songs were all performed during the first two thirds of the story, in the sequel they are spread over the entire running time, meaning, says Lee, that “this film breathes a little more, musically”.

Visually, Frozen II involves new elements that were both suggested by the narrative and made possible by technological developments over the past six years. The sequel’s autumnal colour palette and softer lighting followed naturally from the story being set more in the forest than in the snowy landscapes of the first film. But they were also influenced by a trip that Lee, Buck, Del Vecho and director of story Marc Smith took to Norway, Finland and Iceland to study the landscapes, people and cultures of those countries and consider how real-world elements might be incorporated into Arendelle and its surrounds.

On the technical side, says Del Vecho, “there were so many challenges. As the story evolved, the scope and scale of the movie evolved.” While many of the artists on the sequel had worked on the original, the producer says, “it’s been six years, so their skillset has grown as the technology has grown. So everything from the character animation to their ability to animate faces and get subtext into the acting has grown.”

Among the more challenging elements were the so-called ‘earth giants’ (walking titans made of rock), which play an important role in the story, and characters designed to represent the elements, including a water horse and a wind spirit. The latter, in particular, necessitated the creation of new software, christened Swoop, to work within the framework of the Maya 3D modelling program.

“Each of these elements required cross-department collaboration between the animators, the effects artists, the tech-anim artists [responsible for simulating clothes and hair] and the lighting artists,” Del Vecho explains. “This is probably one of the most complex animated movies Walt Disney Animation Studios has ever made.”

The project was complicated a little more in June of last year when Lee ― who also had screenplay credits on Disney’s Wreck-It Ralph and live-action A Wrinkle In Time, and a story credit on Zootopia ― was named chief creative officer of Walt Disney Animation Studios after the controversial exit from the company of John Lasseter, who had held that title for both Disney and Pixar. Lee plays down the effect of taking on the additional workload, joking that she and Buck “were used to having to divide and conquer ― even on the first film, sometimes I would be in the story room and Chris would be with the animators. So we knew to stay very closely connected every day. But there were moments when I needed to step out. I’m excited to do one job for a little while after this”.

The animation world had its first glimpse of Frozen II when a few scenes were screened at Annecy International Animation Film Festival in June. Audiences followed suit on November 22, when the sequel opened in the US, UK and much of the rest of the world.

The filmmakers, meanwhile, insist they are under no pressure to even contemplate a third musical adventure for Elsa, Anna and the other characters.

Pointing out that Walt Disney Animation has only ever made four theatrical sequels and that “it was unusual for us to have come forward” with the proposal for Frozen II, Lee says the suggestion that a hit for the company has to lead to a follow-up is “a misconception. We certainly would never do it unless it came from a filmmaker.”

As fellow director Buck puts it: “It has to be the filmmaker’s decision, because if you’re going to spend four or five years of your life creating one of these, you’ve got to love what you’re doing ― you have to have a passion for the story you’re going to tell. And that’s how Frozen II came about.”

Frozen II’s fictional setting is identified as “far away, as north as we can go”. Despite the film being set in an animated fantasyland, Walt Disney Animation Studios wanted to talk to those real “far north” people to give the film some realism and accuracy.

The film’s producer Peter Del Vecho says: “At the inception of Frozen II, our team visited Iceland, Norway and Finland on a research trip where we met with many people, including members of the Sami community. While the characters and settings of Frozen II are works of imagination, it was important to ensure elements in the film that were inspired by our research were respectful.” (There was a precedent: for Moana, Disney consulted with cultural experts from the Pacific islands.)

The discussions with Disney included meetings in Burbank, California, as well as in Norway. “We gave advice about what seems appropriate and tried to help them so the story does not enhance stereotypes about our people,” explains Utsi. “It was a very inspiring collaboration with mutual respect. We felt Disney took our collaboration very seriously and invested both time and effort in it.”

Del Vecho adds: “With our Sami collaborators, we fine-tuned the details of our Northuldra [tribe] characters’ clothing and characteristics to ensure they maintained their fantastical identity while being culturally respectful. We also incorporated details that nod to Sami culture, including the characters’ deep connection to nature.”

Disney worked with the Sami Council and the three Sami parliaments in Norway, Finland and Sweden to sign an agreement about working on the film, including that the movie should “give back” to the Sami communities. One gift is a dubbed version of the film in the North Sami language, which will be released on Christmas Day, the same time the film launches in the rest of Norway.

This is especially meaningful for Utsi, who notes that the Nordic countries have had a history of trying to suppress Sami culture for centuries. “Having Frozen II available in the North Sami language in cinemas the same day as all other languages has a strong symbolic significance for our people and the Nordic societies. That Frozen II is one of the first feature-length animations in the Sami language is just unbelievable and such a precious gift, especially for our children.”