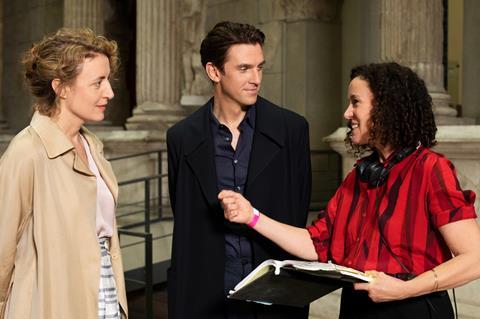 Maren Eggert, Dan Stevens and Maria Schrader on set of ‘I’m Your Man’

As an actress, Maria Schrader is perhaps best known internationally for her role in miniseries Deutschland 83 and its two sequels. As a filmmaker, she wrote and directed Love Life (2007) and Stefan Zweig: Farewell To Europe (2016), and won an Emmy directing 2020 mini­series Unorthodox. Now with her third feature as writer/director, the Hanover-born multitasker has entered new territory, in more ways than one.

Adapted from the Emma Braslavsky short story Ich Bin Dein Mensch, I’m Your Man is both a romantic comedy and an offbeat science-fiction film — notably lighter and more fantastical than either of her previous films. It concerns the sceptical Alma (Maren Eggert), who is persuaded to trial-run a completely lifelike male robot named Tom (Dan Stevens), custom-built to meet her every emotional and physical need.

For the UK’s Stevens, I’m Your Man is also new territory, to some degree. He has acted in German once before, but Tom represents his first lead role in a German movie — and it is a thoroughly challenging role at that: an algorithmic machine that is constantly learning human behaviour.

Schrader (just back from the first day editing her next film, She Said, in Berlin) and Stevens (fresh out of bed in his Los Angeles home) spoke to Screen International in early November to discuss how they crafted this tricky character, and charting new territory together.

Screen International: What was it about the story at the heart of I’m Your Man that drew you in?

Maria Schrader: I was intrigued by the simplicity of the set-up: a man, a woman, and then the man turns out to be a machine. Instantly, I had a thousand questions I don’t yet have answers to: “Do we all want to stick with our own kind? Would it be more interesting to talk to machines, sleep with a machine, have a robot who is better at everything than us?” Then, of course, I had all these filmmaker’s questions: “Is this a sci-fi or is it a fairy tale? Does it need to be set in a future world? What would that world look like?”

Dan Stevens: It’s my favourite kind of sci-fi. It’s that Ballard thing where it’s very near future — essentially the Berlin of today with one difference: there’s this [android] programme in existence. So in that sense you really get to lean on the human story. You’re not looking at flying cars or silver suits. I love that kind of approach to storytelling.

Schrader: We decided it’s just a pact between you and me; we both agree that Dan Stevens is going to be a machine [laughs]. And you believe it. You better believe it, because the movie doesn’t give you many sci-fi elements, just a brilliant actor.

What made Dan your perfect Tom?

Schrader: It almost feels like a win in the lottery, because the stakes were so high. He has to be really good-looking. He has to have humour. And he has to be able to speak these very complicated German lines, even though I was seeking a non-German actor. I think it’s interesting for a German audience to have an actor who brings some flavour, an accent, something which makes it easier to believe he’s from the algorithm, or from outer space, or from out of the fridge, or wherever Tom comes from [laughs]. We started looking in Europe, and then I heard about Dan and remembered he speaks German, having seen him in another film [Hilde] 10 years ago. Watching him in Colossal, Legion, The Guest, there were moments where I almost saw Tom. There is such a precision. Correct me if I’m wrong, Dan, but I would say you are a very conscious actor. And this was something I very much looked for in Tom.

Stevens: I guess… I’m trying to think if I’m a conscious actor, but I’m being conscious of whether I’m conscious or not! Tom is such an unusual role. It required a hyper-awareness of the moment, and of what Alma was doing, which needed to be reflected. Tom is there to serve Alma, to be the man she needs. Tom’s behaviour was so dependent on the situation and who else was in the scene — calibrating that became a very different exercise than I’ve done before.

How tough was it, Dan, to achieve that calibration in a language that’s not your own?

Stevens: Well, it’s a language I love, so in that sense it was pleasurable. But Maria’s right: the technical German that Tom speaks — particularly at the beginning of the film, where he’s delivering inappropriate German for the situation — was a bit of a headache. I’m thinking back to the scene in the car, where Alma’s driving and he’s giving her instructions… Maria will tell you, I was on the verge of a nervous breakdown trying to get all this stuff out at speed. But I have never had that kind of immersion before, where I was, by the end of it, thinking and even dreaming in German.

Schrader: For the non-German-speaking audience, I should say that Tom’s lines would have even a native German actor’s tongue in knots. It’s very demanding. 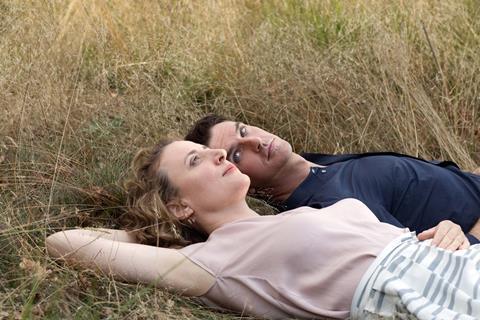 Dan, with such a demanding role, does it help to have a director who is a seasoned actor?

Stevens: It does. It was a very technical role, with many little moments we wanted to build in that would suggest the human, that would suggest the robot. So I found it incredibly useful to have Maria’s actor vocabulary to cut through some of those things and pinpoint those moments. Maria, how is it to direct as an actor?

Schrader: It defines my work routine, and it’s already started with the writing. When I write a scene, I’m playing it myself in my head. With the directing, I’d think, “How can we make the machine visible, without being too clichéd? How can we find something very specific?” We talked about a lot of these moments, and of course it is my vocabulary. When I say, “Why don’t we try to separate language and gesture a bit in an unnatural way?”, that’s because I, as an actor, also think about such possibilities.

Stevens: We looked at the screwball-comedy model, and watched a lot of Cary Grant and Jimmy Stewart. I remember Maria saying, “Just look for one or two gestures. You’re not imitating Cary Grant, but if he did one movement that could accompany this moment, what would it be?” We liked the idea that Tom had been uploaded with these old screwball comedies, and that he would abstract some of that behaviour and try to implement it in a scene. It just looks odd, and if you separate — as Maria says — the thought and the gesture, it’s inherently funny. Trying to be human but missing it by a beat. I think it takes an actorly sensibility to recognise the fun of that exercise.

Dan, it was very impressive when you poured a cup of coffee without even looking.

Stevens: Thank you very much. I worked very hard at that [laughs]. That was all me. No CGI.

Schrader: It came as a surprise to me, too. I loved it.

Stevens: There were certain things I wanted to find that a robot could do that might impress a human, and that was one of them. I’m glad you picked up on it.

Maria, does Dan have a big future in German cinema?

Schrader: I think if he moved to Berlin, he would be very busy.

Stevens: [laughs] Well, that’s good to know. Berlin is one of my favourite cities in the world. The crews there are incredible, the stories there are incredible. It’s a city that seems to resonate story. Yeah, it’s definitely possible I will go back and do something there again. Maybe with Maria. Look at me, trying to get a job here…