Morten Tyldum, Alik Sakharov on directing with "a different language" in 'Counterpart' 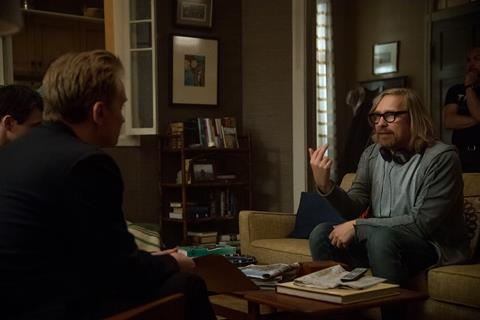 Morten Tyldum on the ‘Counterpart’ set

A taut espionage thriller with a sci-fi twist and a Berlin setting, Counterpart has a distinctly cosmopolitan feel. The Starz series is about a low-ranking UN spy agency worker, played by Oscar-winning Whiplash star JK Simmons, who is thrown into a web of intrigue when he meets his near-identical counterpart from a secret parallel world.

It boasts a contingent of international talent led by series creator Justin Marks, writer of Disney’s live-action The Jungle Book and TV movie Rewind, and Norwegian filmmaker Morten Tyldum, who was on board almost from the start as executive producer and director of the pilot episode.

“When Justin showed me the draft of the first episode, I could immediately see this was going to be a very smart project,” says Tyldum, best known for Headhunters and The Imitation Game. “It’s about being able to see the potential of a life unlived. Everyone has the potential to be something different, but circumstances have made us who we are. How would we have turned out if circumstances had changed? That is a very cool and very interesting concept.”

Counterpart is produced by Anonymous Content, Gilbert Films and Media Rights Capital. To set the tone and establish a unique visual language, Tyldum says he and the other executive producers “looked to a lot of classic, character-driven thrillers.” As a result, Counterpart “has an almost noirish feel — it’s very composed, very graphic”.

To differentiate between the show’s two versions of Berlin — the one like our own tagged ‘Alpha’ by the writers, the other referred to as ‘Prime’ — Tyldum aimed to avoid cliché and make the distinction “through storytelling, through architecture, through small plot devices”.

Simmons had his work cut out playing the central character of Howard, who exists in both worlds. In Alpha he is a kindly but underachieving husband. His Prime incarnation is a tough-minded spy and estranged father.

“JK did a phenomenal job of making them two distinct characters,” says Tyldum. “When you saw close-ups of them it took you two seconds and you knew immediately if it was Howard or Howard Prime. Just from the way his face sags more when he’s Howard, and the way one has more confidence and the other is more downcast. It’s subtle and it feels real. It’s pretty remarkable.” 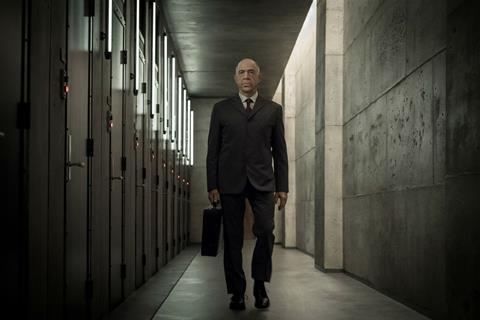 The differences - and gradually revealed similarities - between the two Howards become even more crucial to Counterpart’s story arc in the three episodes of the first season that were directed by Alik Sakharov.

Uzbekistan-born Sakharov - who emigrated from the then-Soviet Union to the US in the 1980s and has served as both a cinematographer and a director on series such as The Sopranos, Game Of Thrones and House Of Cards - was charged with staging the tense scene in which the two Howards first meet face-to-face after a few weeks living each other’s lives and beginning to discover each other’s secrets.

“Usually you end up shooting long, long hours on scenes like this,” says Sakharov of the sequence, which required Simmons to trade lines with a stand-in playing first one, then the other Howard. “I realised I had to shoot with four or five cameras and that allowed us to shoot very fast and efficiently, and not exhaust any of the actors, because my primary concern was JK’s energy level. It worked out brilliantly.”

An episode telling the back story of another character - the enigmatic Clare, played by Nazanin Boniadi - gave Sakharov a chance to shoot in what he describes as a “filmic” style that is rarely employed nowadays due to the propensity in modern television for staccato editing. “Because the episode was very much set in the past, that immediately allows you to use a different language,” Sakharov explains. “We shot it in the style of 1970s cinema, with longer takes, a wider angle lens and fluid camerawork, allowing the camera moves to tell the story.”

The episode also gave Sakharov, who spent most of his youth in Soviet-era Moscow, a chance to tap into his personal history. That history “undoubtedly” gave him some insight into the Counterpart story, he confirms, “but I don’t want to intellectualise it because it’s part of the subliminal mechanism”.

Neither Sakharov nor Tyldum will reveal much about Counterpart’s second season, which is now shooting its 10 episodes in Berlin and Los Angeles. But it is a safe bet the show will continue to challenge audiences in the same way it challenges its cast and crew.

“We made a decision early on that we didn’t mind if this was going to be a show where you really have to focus and pay attention to get what’s going on,” Tyldum explains. “A show for, not necessarily smart people, but people who want to follow a challenging plot line. That fits well with the spy genre. Good spy movies have always been complex and smart, and very subtle in how they dish out clues for the audience to follow.”