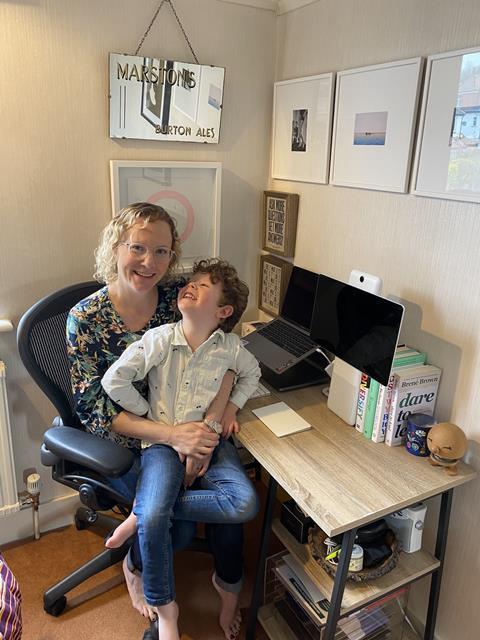 Following a stint as an independent producer, Anna Higgs made her mark in the UK film industry with her four-year stint at Film4, first as commissioning executive at creative innovation fund Film4.0 and then as head of digital.

Going on to roles at Nowness TV and as a consultant for the likes of The Ink Factory, she joined Facebook in 2018 and serves as head of entertainment media partnerships for Northern Europe, collaborating with partners across creative sectors to engage audiences on the Facebook platform. Higgs is also deputy chair of the Bafta Film Committee.

Is it business as usual for you and your team as you all work remotely home?

I would say it’s business as unusual at the moment! As you can imagine it’s all go for my team. I lead the media partnerships function for Northern Europe which is focused on supporting partners that span media publishers, creators, music artists and public figures, most of whom have seen their business dramatically shift with the pandemic. Tours are cancelled, production is halted and all sorts of formats across the entertainment landscape face fundamental change.

The big project we’re working on at the moment in the UK is #TogetherAtHome, using our platforms to showcase all the brilliant work partners are doing across Facebook and Instagram. We launched last week with an eclectic line-up including Mo Gilligan, the Royal Opera House, Jamie Oliver, Mylene Klass and Emeli Sandé. This week’s features Ballet Boyz, Sarah Millican, Andrew Lloyd Webber and Romesh Ranganathan.

How are you maintaining an office routine?

I’ve always tried to work one day a week from home, as I find it a good way of having focused time to get a strategy or a presentation done out of the normal flow of the office. The additional complication for me is that I’m six months pregnant right now, so I’ve invested in a really posh refurbished chair for my spare-room office. The yoga ball I usually sit on didn’t cut it for full weeks at my desk. I’ve made our weekly team meeting a bit shorter but twice a week so we’re in more regular contact. I have one-on-ones with each team member and also office hours where the team can dial into my video conference address and chat about whatever they need to.

Which systems are you using to talk to one another and clients?

As a tech company we had a lot of these digital communications channels already baked in. We all use Workplace – basically Facebook for businesses – and BlueJeans which is our video conferencing tool. I’ve also been trying out lots of other channels too like Zoom for my BAFTA Film Committee and board meetings – which is the most fun when you figure out how to change the backgrounds – plus House Party for social stuff and WhatsApp video chats too when everyone’s wifi hits a wall.

How are you and your colleagues keeping up team morale?

The virtual coffee breaks for our EMEA team are lovely, and we’ve had virtual yoga too. We also have a Workplace group for sharing pop-culture fun, and that’s kicked up a gear. I start each team meeting with a challenge for the team which encourages us to share a bit about ourselves. The wearing-a-hat-to-the-meeting challenge was won by a team member who showed up on video conferencing in full Deadpool mask.

What advice would you give to people in the business who are worried about the future?

That great challenge comes with huge opportunity. I’ve seen some brilliantly visionary stuff emerge amidst this crisis. Studios are starting to break windows and will hopefully learn about what and how audiences want to engage with film that could last beyond this immediate crisis. Industry bodies are galvanising much-needed support for freelancers. The independent sector is doing brilliant things with virtual cinema and Q&As.

As a former independent producer, I would never underestimate the precariousness of this situation for huge parts of our industries, so I’m glad we have infrastructure to help here in the UK. But at a macro level, if this isn’t a prime time to think about how you can innovate against the odds, I don’t know what is.

If you have children, how are you managing keeping them entertained/educated while you work?

My five-year-old was in his reception year at school so being yanked out of that has been tough. The teachers are sending lesson plans and timetables each day which we’re getting through with varying degrees of success. The parents’ WhatsApp group is more of a challenge to survive at this point, but that’s a whole other story! My husband is an app developer and has worked from home for nearly 10 years, so he’s a seasoned pro at this. We’ve had to timetable to tag-team the schooling as our son isn’t at the stage where we can just pop him in front of a virtual tutor.

What about home life at the weekend?

Key mission at weekends is surviving and not driving all of us up the wall. I actually think the emerging meme of using lockdown to encourage hyper-productivity is fairly toxic. It’s great that Shakespeare wrote King Lear when he was dodging Elizabethan-era pestilence, but he was a notorious childcare dodger.

What advice do you have for home working?

Routine is important and getting outside – sensibly, within the guidance! – is vital. I’d been head-down the first week and hadn’t really been outside. I realised it was really affecting my mood, so when I went on a walk and did a couple of my one-on-one team check-ins on the phone instead of VC. I’d felt like I’d had a holiday.