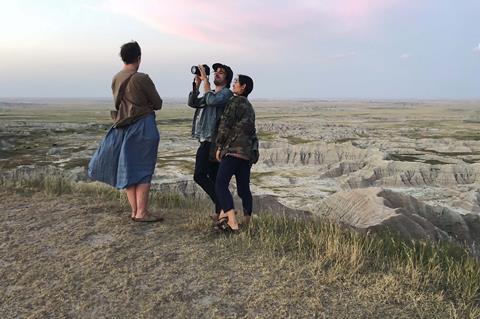 A native of England’s sparsely populated county of Cornwall, Camerimage 2020 winner Joshua James Richards seems well-suited to filming a story like Chloé Zhao’s Nomadland — which sees fictional characters Fern (Frances McDormand) and Dave (David Strathairn) interact with real-life nomads in authentic locations in the American west. Following their collaboration on Zhao’s Songs My Brother Taught Me and The Rider, Nomadland saw the writer/director and DoP adopt the same kind of minimalist philosophy as their van-dwelling subjects. The guiding principle — throughout the four-month shoot in strikingly contrasting settings across seven states — was to approach each day “with respect to the people and to the environ­ments we’re going into”.

It’s quite a journey you’ve made from growing up in Penzance, England, with dreams of being a painter.
I [spent a lot of time] in church as a kid and I used to just pass the time by watching people’s faces. And I think that’s basically what I’m doing 30 years later.

So many of Nomadland’s shots are specific to the sun and the light. How did that affect the film’s pacing and shoot schedule?
Right from the beginning Chloé said to me, “The images have to sing in this movie, okay?” What she meant is the visual language of the film needs to also communicate Fern’s emotions and her journey. It needs to feel like a poem. Chloé has that kind of understanding, that light is emotion.

How do you walk the fine line of wanting the film to look natural but not like a documentary?
You’re always dealing with emotion. That’s the anchor. My painting background means I’m drawn to the nuances of natural light. I do believe there’s a beauty that is almost impossible to replicate in filmmaking.

But in the case of Nomadland, it does play a big role in expressing this way of life and culture that is fading away. It’s a landscape that is constantly regenerating, constantly in a state of decay. And we’re always moving through it, and there’s always that sun setting in the west. A sort of promise of something. There’s always that possibility — she can become something else in this landscape. So it was really trying to invoke these kinds of feelings.

How flexible could you be with the shooting schedule?
You’d get somewhere and we would just make sure we had ample time to pivot if we needed to. But really it was a very loose schedule based around the time of day, the weather and the nomad availability. Always enough time that it feels gentle. Though it can get rough — we call it the magic hour hustle. Go! We’ve got 20 minutes where everyone is absolutely focused and now it is all about the filmmaking. The whole crew knows exactly what’s going on and the team is small enough that you can communicate to everyone. So you really feel like you’re this singular organism.

So it was very much about minimal crew size and flexibility?
Chloé casts the crew like she casts the actors. Sometimes people might not have the experience but they have the energy and the excitement for it. It’s kind of choosing a crew that’s right in terms of its character as much as its filmmaking.

What were your shooting tools?
Like The Rider, I shot with the Arri Amira with Ultra Prime lenses. And the Alexa Mini, which I had on the Ronin 2 Gimbal. It works efficiently, it’s small and light. It’s different from a Steadicam as it draws kind of straight lines, following, tracking. It was to give us that freedom so if people want to get up and start walking, they can. I would have the Amira so they can do that too. Sometimes the still frames are some of the most difficult. Moving is easy — staying still is hard.

What were the main challenges in getting those luminous landscape colours in post?
When we talk about post, we had a year gap because we did Marvel’s Eternals [which Zhao directed] in between so it was weird when I came back to it. I had to reconnect with it. It was difficult to grade because there were so many environments — we filmed in seven states. It became about being true to those environments and not trying to give a uniform look to the whole movie. To create a consistency, I underexposed everything by about a stop-and-a-half.

How was the Marvel adventure?
That was an interesting experience: learning to steer a vessel that big. What’s wonderful about doing films like Nomadland is you don’t feel you need any more or less than what you’ve been given to tell that story. If those are the stories you gravitate toward, this is a really wonderful way of making films. But if you have big, fantastical stories to tell, then you need different things.

What is your next project?
All I can say about the next one is instead of landscapes it’s oceanscapes. It’s about people who live in and around the ocean.