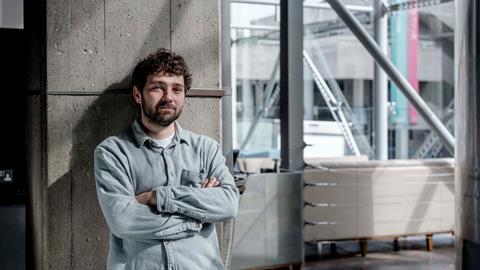 A self-described class clown with a career goal to do more work in comedy has led Jake Davies to comedic biopic The Phantom Of The Open. Written by Simon Farnaby (Paddington 2) and directed by 2010 Star of Tomorrow Craig Roberts (Eternal Beauty), the film tells the story of UK shipyard worker Maurice Flitcroft (Mark Rylance), who became an underdog hero when he entered the playoffs for the 1976 British Open golf championship and shot the worst score in history (eOne releases in the UK and Ireland on November 5).

“It was amazing to work with Mark Rylance,” says Davies, who plays Flitcroft’s eldest son Mike, a junior manager at the Barrow-in-Furness shipyard who must decide if he is embarrassed or proud of his father. “Most things I do and learnt in acting relate back to him.”

Hailing from south London, Davies started acting as a child at an amateur theatre company in Eltham on weekends, joining the Brit School aged 16. “Going to the Brit was a massive informative thing for me,” he notes. “It was insightful to meet different people from varied walks of life because acting is a perception of life and telling stories. It encourages individuality out of you.”

Davies secured his agent following a showcase performance at the school, which the actor views as a pivotal moment. “I didn’t know anybody who worked in any capacity in TV or film. I never thought acting was something kind of do-able.”

The Phantom Of The Open and Disney’s fantasy drama Artemis Fowl (2020) sees Davies move away from darker roles after the BBC’s The Missing (2015) and Black Mirror’s ‘Metalhead’ episode (2017). He also appeared in Paul Andrew Williams’ revenge drama Bull, which premiered in August at Montreal’s Fantasia film festival, and will be seen in Channel 4 prison series Screw, created by Rob Williams, which has wrapped. Its casting director, Kahleen Crawford, says the actor’s performance “absolutely nailed it,” adding: “We had to win him over other scripts he had on offer.”