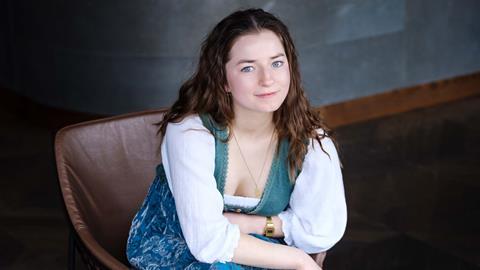 Had things panned out differently, Hazel Doupe might have been representing Ireland at the Olympics instead of being one of its rising screen stars.

“I used to compete as a gymnast and I won a couple of national medals,” she says. “I did at one point say, “This is the year I start training for the Olympics; but acting always took precedence.”

The podium’s loss is her chosen profession’s gain. Doupe’s impressive list of credits, at the age of 20, include 2015’s Peter And Wendy, an adaptation of the JM Barrie story starring the “incredible” Stanley Tucci; a small but telling role in 2019’s Calm With Horses, as one of Barry Keoghan’s siblings; and an eye-catching lead the previous year as a traveller with ambitions to be a boxer in Float Like A Butterfly. “I kept up the boxing so I’ll be okay if anyone starts something,” she says. “It’s always good to take the lessons you learn into your outer life.”

A valuable lesson was also picked up while shooting You Are Not My Mother, a disturbing family-based horror film unveiled to acclaim at 2021’s Toronto International Film Festival. “I was on my own a lot because I thought it was what I needed,” she says of the film, which follows a schoolgirl who comes to think her mother has been replaced by an evil doppelganger. “But sometimes when it’s really heavy, you need to be around people.”

Getting nominated for a best actress IFTA (Irish Film and Television Award), one of six nods for Kate Nolan’s film, was the icing on the cake. “I was so overjoyed I couldn’t put it into words, she says. “And the [virtual] ceremony was lovely too, chilling on your sofa, wearing your best dress”

The future looks bright for an actress who has since landed a role in Embankment Films’ Dublin-set comedy The Miracle Club alongside Maggie Smith and Kathy Bates.

And Doupe may well add singer-songwriter to her CV. “Hopefully I’ll have an EP soon to send out into the world,” she reveals. “For me, performing is bringing every aspect of your life that you love into the one place.”