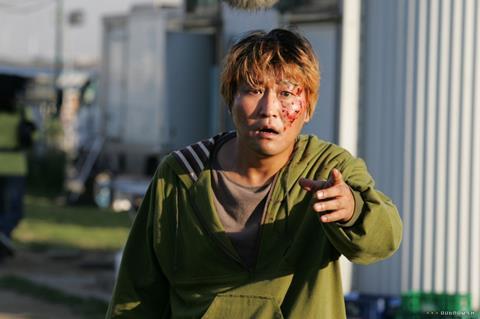 A mutant sea creature brings panic to the streets of Seoul and new strength to frayed family ties in The Host.

This leftfield offering from Memories Of Murder director Bong Joon-ho is a preposterous but very entertaining fusion of creature feature thrills and heartfelt human drama.

Evoking echoes of Godzilla, the zesty B-movie sensibility of Larry Cohen and the biological horrors of early David Cronenberg, it is the kind of guilty pleasure that midnight screenings were born to serve.

Well-paced over what initially seems an excessive running-time, the film manages an effective balance of the various story elements and mood changes.

At Cannes, the Directors’ Fortnight audience was jumping with fright and chortling with pleasure which suggests it should have a future as a little cult crowd-pleaser especially in territories where Asian cinema has developed a following.

Treading the well-worn path that led to Piranha (1978), Alligator (1980) and countless others, the film begins with a prologue set in the morgue of an American Army base.

Scott Wilson (In Cold Blood) makes a brief appearance ordering that contaminated formaldehyde be poured down the sink even though he is warned that it will flow directly into the Han River.

Years later, a strange creature is seen hanging from the Han River Bridge.

It soon leaps into action, terrorising anyone in the vicinity and making off with Hyun-seo (Ko A-sung), the daughter of Gang-du (Song Kang-ho).

The government establishes a blockade, declaring that the creature hosts an unidentified virus.

The quest to save his daughter brings out the best in the gormless Gang-du and also forges a closer bond with his family for whom this is just one more fight against the adversities of life.

There is little doubt of The Host’s appeal for genre fan boys with the rather endearing animatronic creature resembling an aquatic version of alien and Boon Joon-ho taking pointers from Jaws in the way he can set the heart racing with a sudden appearance from the beastie.

There is also a willingness to embrace the comic elements of the tale with some scenes bordering on the edge of Scary Movie-style spoofery.

Any chance of the film’s appeal spreading beyond this core audience lies in a story that manages to retain a human edge despite the sheer silliness of everything that happens.

He may seem a figure of fun but Gang-du becomes the same kind of determined, single parent as Tom Cruise in War Of The Worlds.

When his cynical younger brother Nam-il (Park Hae-il) and sister Nam-joo (Bae Doo-na) commit to the quest it becomes all about family with Nam-joo’s nifty archery skills coming in very handy.

Well-paced over what initially seems an excessive running-time, the film manages an effective balance of the various story elements and mood changes. It exploits the suspense inherent in Gang-du’s imprisonment in a vast sewer that has become the creature’s lair and underlines Gang-du’s status as a heroic loser by the fact that nobody will share hisbelief that his daughter is still alive.

The Host is off-the-wall but eminently accessible which means that someone is bound to consider the remake potential for a wider western audience.