The resolution war: is cinema falling behind home entertainment on innovation?

While cinemas initially forged the way, new players and exhibitor caution are creating a gap in visual display quality between theatrical and home entertainment. 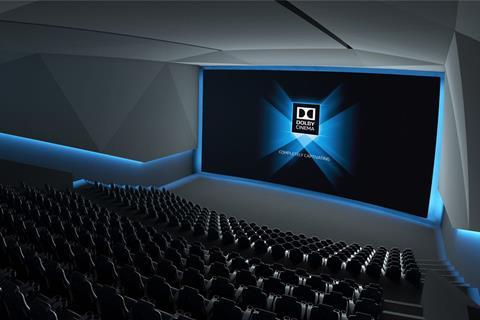 The cinema industry has consistently managed to innovate the viewing experience ahead of home entertainment — but there are signs this may be stalling. Having introduced digital projectors capable of playing back content at 4K resolution in 2007, ahead of TV, exhibition is on the verge of being leapfrogged by consumer technology.

Globally the number of installed 4K projectors is 27,500, comprising just 17% of total screens worldwide. Sony took the lead in supporting 4K with its vertically integrated business, which spans from content to hardware (projectors, cameras, TVs). Its global fleet of roughly 17,000 projectors is 4K compliant, while only 10% of projectors sold by Barco, Christie and NEC are 4K. According to analytics company IHS Markit, the markets with the highest penetration of 4K digital projection are the US (40%), Thailand (35%) and Estonia (52% of a small total base). In the UK, 32% of screens are 4K.

“4K has not become the dominant format as many in the industry hoped,” says David Hancock, director, film and cinema at IHS Markit. “There’s been a lack of momentum needed for all productions to go to 4K.”

“Ten years ago, 4K became a buzzword, an added feature — some would say a marketing device — to convince exhibitors to buy 4K instead of 2K projectors,” adds Brian Claypool, VP of product management for global cinema at technology company Christie. “But even now, we’re seeing only 20% of content released by the studios in 4K.”

One inhibitor is cost. Production processes can be computationally expensive because of the need to transfer, store and manipulate greater amounts of data at every stage. “This also comes with an increase in artist cost due to the extra detail required,” explains Graham Jack, chief technical officer at visual effects company Double Negative. “Having the extra resolution available in VFX is often useful, as we may need to zoom in or process the image in some way, but dealing with higher resolutions increases demand on resources.”

Consequently, while more films are being captured using cameras capable of 4K resolution, the majority of films continue to be released in a lower 2K resolution, the equivalent of HD television. Of the 800-plus titles released in the UK in 2016, only 34 — including Allied and Bad Santa 2 — are listed by Sony as being natively produced and delivered with a 4K Digital Cinema Package (DCP). Six of those were re-releases of classics remastered to 4K, including Akira Kurosawa’s Ran. This year, just nine films are listed (by Sony) with a 4K DCP, including Dunkirk and Kingsman: The Golden Circle.

Most other titles screened with a 4K projector are upscaled in post-production, a process that adds pixels into the picture, although Vue CEO Tim Richards, who has invested heavily in Sony 4K projection for his cinemas, says even movies upscaled in this way “while not 4K, will be way better than 2K”.

Some cinema owners report frustration at having to play 2K movies on 4K screens. “Even most bigger blockbusters are often delivered in 2K,” says Jan Petersen, CTO at Nordisk Film Cinemas, which operates 26 4K screens in Denmark and another 42 in Norway out of a 232 total. “We would like to see more 4K mastered content, especially on bigger screens where pixelation can be visible in 2K.”

Owners of independent and boutique screens as much as the mega-chains voice similar concerns, admits Oliver Pasch, sales director at Sony Digital Cinema 4K. “We’re at the point now where consumers can pick up a 4K television for a few hundred euros,” he notes. “And we’ve got fantastic 4K content coming [to the home] from the likes of Netflix and Amazon. As a cinema owner, it’s getting harder to justify charging your customers for anything less than a genuine 4K big-screen experience.”

Although second- and third-generation 2K projector models can be upgraded to 4K, cinema owners remain unconvinced of the value of the higher resolution alone. Unlike 3D, immersive audio, or dynamic or luxury seating, exhibitors have not charged consumers a higher ticket price to see films in 4K alone; 4K is more likely to be incorporated into the wider Premium Large Format (PLF) offer. “When you blow a 4K picture up, you will see a profound difference,” says Richards. “On a bigger screen, the 4K image is simply better.”

“We would absolutely like to offer guests more 4K content in our ISense auditoriums,” says Mike Bradbury, head of cinema technology at Odeon Cinemas. Odeon operates 16 4K projectors in the UK and Ireland that are mostly housed in its ISense-branded PLF. This will rise to 18 by the end of November, out of a total screen base of 942. “The larger the screen, the more 4K is required due to the inevitable pixel enlargement, and we would like to ensure definition is maintained,” he adds.

The slow adoption of 4K content distribution is compounded by the higher cost of producing 4K DCPs. Furthermore, all 3D screenings are in 2K resolution as there is no 4K 3D standard in digital cinema. This may explain why, in 2017 up to June, of the top 20 films globally (by revenue), 80% were post-produced in 4K, but only two were given a 4K cinema release, according to Futuresource Consulting data.

However, the minimal perceptual gain offered by the leap in resolution cannot be ignored. In promoting its projectors, Sony boasts of the “lifelike detail and rich vivid colour” of 4K that “comes close to the limits of human vision,” but there is little evidence consumers are aware — or care — if the theatrical content is 2K or 4K. “There is a visible difference based on viewing distance [the closer to the screen, the better the visual image] but we don’t feel there is room for a price increase based solely on 4K,” says Petersen.

What makes greater visual impact, it is commonly agreed, is higher brightness and greater aesthetic contrast ratios between the dark and light areas of a picture, known as high dynamic range (HDR). “Resolution is important but HDR is probably of bigger importance,” Bradbury says.

“4K is a ‘must have’ because movies will eventually shift to 4K, but the reality is that moviegoers may not notice how different the image is,” says Jean Mizrahi, president and CEO of Ymagis Group. “The real challenge is not 4K versus 2K, but HDR versus SDR [standard dynamic range]. The audience sees the difference when a movie is projected in HDR.”

Despite this, HDR is in a fraction of venues. Market leader Dolby has installed fewer than 100 HDR-enabled Dolby Cinema screens worldwide — whereas HDR is becoming as de facto in TV displays as 4K. “Amazon, Netflix, Hulu and HBO are making big investments in sourcing HDR content,” says Mizrahi. “This is a key issue for the cinema business.”

While Hancock says there is no evidence people are deserting cinema because of a better home experience, “if cinema does stay at 2K then this could yet become an issue”, he warns. “Cinema has been the driver of quality, where breakthrough technology has made the big screen the ultimate viewing experience. We are now seeing these developments happening in other areas.”

“The streaming providers [Netflix and Amazon] have been more aggressive than traditional studios in terms of demand for mastering content at higher than 2K,” adds Sherri Potter, SVP and head of worldwide post-production services at Technicolor. What’s more, the gap between image capture and end display is widening. A new range of cine cameras from Red and Sony are capable of recording 8K pictures (16 times HD). Cinematographers argue that footage shot at this extreme resolution is likely to deliver a richer final picture even when downscaled to 2K for delivery.

According to Futuresource, studios are more likely to record at higher resolutions, especially for CGI-heavy titles, for sale as a 4K product to the higher value home-entertainment market. Of last year’s top 20 revenue earners, four were given a 4K packaged media release, marginally more than for theatrical presentation alone. The first feature to be largely recorded in 8K, Guardians Of The Galaxy Vol. 2 was ultimately post-produced and delivered to cinemas in 2K. The film is also Disney’s first 4K UHD (ultra high-definition) Blu-ray.

A solution to cinema’s projection bottleneck ironically could emerge from consumer technology. LED screens are being commercialised for theatrical markets by Samsung, with Sony to follow. These direct view or emissive displays can be configured to any size and promise greater contrast ratios and brightness superior to any projection technology, with resolutions up to 16K if desired.

“If ROI [on cinema LED] reaches an affordable level within three to five years, they are a very good candidate for projector replacement and probably sooner for new builds,” believes Chris Chinnock, founder of analytics company Insight Media. “The emissive cinema screen market is so needed to offer image quality with a huge-screen format on a par or better than the home experience.”

It is estimated that 35mm film has a digital resolution equivalent to 4K: 35mm Imax film equates to 6K, while 70mm Imax is closer to 12K. Regardless of how they are shot, most films will be converted into a digital format for editing, colour grading and VFX (called digital intermediate and usually at 2K resolution). While some films are scaled back up to a digital or film print for distribution, even Imax projection systems are not capable of playing back higher than 4K.

The 4K home market emerged with the standardisation of the UHD format in 2012. According to Futuresource Consulting, by the end of 2017 there will be 174 million 4K (UHD) TVs globally, equivalent to 8% penetration (the UK is estimated to be at 10%). By 2021, that is expected to reach 32% as new displays incorporate 4K as standard.

4K home content (VoD or live sports channels) are sold at a premium through subscription services such as Netflix or pay-TV such as Sky Q. More studio content is mastered in 4K for the home than is projected in cinemas because of the higher value of 4K home content, and because Netflix and Amazon are commissioning and distributing 4K TV series. This content is supplemented by 4K live streams, primarily sports. However, there are also bottlenecks in delivery holding back 4K distribution.

“Broadcasters have bandwidth constraints as well as a limited, albeit growing, addressable market of 4K TV owners, which means that adding a number of UHD channels wouldn’t have an ROI,” says Futuresource analyst Tristan Veale. “Consumers object to paying extra for UHD content when their slow broadband means they’re not receiving a 4K stream for the duration [of the streamed content].”

According to Ampere Analysis, the most effective commercial way to put studio 4K content into homes is physical media. The 4K Blu-ray disc is niche even within the Blu-ray market and likely to remain so for the foreseeable future. Japan will begin broadcasting in 8K locally from 2018 but few analysts think this extreme resolution will migrate to other countries any time soon.