The wonder of Wroclaw

PROMOTIONAL FEATURE: Rounding off its year-long celebrations as European Capital of Culture, Wroclaw will be hosting this year’s European Film Awards in December. 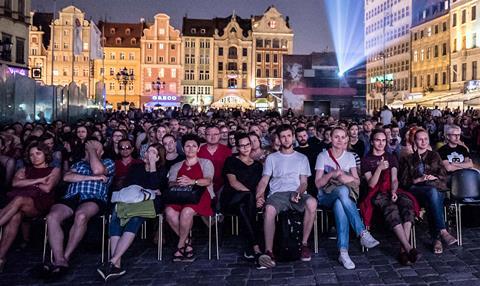 Wroclaw, in western Poland, is a city steeped in cinema. It is located close to the film studios where many classic Polish films were made, including Andrzej Wajda’s Ashes And Diamonds and Roman Polanski’s Knife In The Water. (Wajda, one of the towering figures of Polish cinema, now 90 years old and still working, has been invited to attend the European Film Awards.) More recently, Steven Spielberg shot part of Bridge Of Spies in Wroclaw.

Under the energetic charge of film distributor, programmer and curator Roman Gutek, the city has a thriving nine-screen cinematheque and two festivals — the fast-growing T-Mobile New Horizons International Film Festival and the American Film Festival.

“Bringing the awards to Wroclaw with their full programme will make the international film community aware of the city,” Pascal Edelmann, European Film Academy

“Wroclaw is perceived as one of the most important centres for the local film industry,” Gutek says, drawing attention to the “close collaboration” in recent years between the Polish film industry and the municipal authorities. Gutek believes Wroclaw’s transformation into one of the country’s key film hubs began in earnest when the T-Mobile New Horizons International Film Festival (known as Era New Horizons back then) moved to the city from Cieszyn in 2006.

“The influx of film-makers, producers and cinephiles from every part of the country — and the whole world — reinforced the position of Wroclaw,” Gutek says. Initiatives such as Polish Days and New Horizons Studio (industry events held during the New Horizons festival), the American Film Festival (with its industry event US in Progress), A Sunday in the Country (a meeting for film critics) and the School of Film Agents (SOFA) have proved a huge draw for the industry. Wroclaw mayor Rafal Dutkiewicz is himself a confirmed cinephile. He is passionate about the work of Wajda and Krzysztof Kieslowski, and is also a big admirer of Spanish auteur Pedro Almodovar, whom he met in Berlin at a previous edition of the European Film Awards (EFAs) and invited to Wroclaw.

Indeed, many stars and big-name directors will be in town for the EFAs on December 10, which are being held in the spectacular surroundings of the National Forum of Music. Dutkiewicz describes this as the “final step” in Wroclaw’s year as European Capital of Culture. He insists, however, that the event is not just for the European film industry’s elite, pointing out that locals are getting involved too.

In the lead-up to the EFAs, there will be screenings of 28 films that have previously won prizes since the awards were established in 1988. Running from September 6 to December 30, this is described by Gutek as a “mini festival” in its own right. He explains there are plans afoot to broadcast the Gala ceremony in one of the city’s main cinemas, “so the public can participate and be closer to the film-makers on the special day”. Meanwhile, in December, the audience in Wroclaw will be able to see most of the EFA-nominated films, also at the New Horizons Cinema.

Masterclasses are planned, as is a retrospective of the films of Wim Wenders, which starts on September 22. The German director’s US-made films, including Paris, Texas, will screen at the American Film Festival in October, and a full retrospective of his work will take place at the New Horizons Cinema. Wenders himself is due to attend on December 11.

Cinema has been at the heart of the city’s European Capital of Culture celebrations. At the New Horizons festival earlier this summer, there were special screenings of Matthew Barney’s River Of Fundament and Natalia Korczakowska’s filmed opera Lost Highway, based on David Lynch’s movie. The festival also held a series of lectures, Masters of European Cinema, involving such prominent figures as Carlos Saura, Jessica Hausner and Ulrike Ottinger.

Polish auteurs have been involved in the EFAs from the outset. Kieslowski won the best film prize at the very first ceremony in 1988 with A Short Film About Killing, and fellow director Krzysztof Zanussi is an EFA board member.

Agnieszka Holland, the Polish film-maker whose credits range from political dramas such as A Lonely Woman to episodes of high-end US television dramas The Killing and House Of Cards, is currently the academy’s chair. She points out that Wroclaw is a city steeped in tradition and the perfect place for an event such as the EFAs. “[Wroclaw] is very developed. Culturally, it is extremely vivid,” she says. “It was Germany before the war, then it became [part of] Poland.” Holland herself recently gave a masterclass in Wroclaw and has been shooting her latest feature, Pokot, nearby.

As the European media has reported extensively, there has been a shift to the right in Polish politics. The Law and Justice Party was successful in both parliamentary and presidential elections last year. The reverberations have been felt in the film industry. This was underlined in some bad-tempered debate in Poland about Pawel Pawlikowski’s Oscar and multiple EFA winner, Ida. Conservative critics have accused the film of being inaccurate and of misrepresenting the extent of antisemitism in Poland in the war years and their aftermath.

“[Ida] is a beautiful and important movie and, secondly, I am always for 100% freedom in artistic life,” Dutkiewicz reflects on the controversy. This is a sentiment echoed by the European Film Academy, which champions freedom of speech and expression.

Holland also expresses her frustration at the way politics have been allowed to seep into the cultural sphere in Poland. “There is some kind of war about the past, which started with the government, the new regime,” Holland reflects. “They want to rewrite many cases of recent Polish history and sometimes embellish those cases. Honest, insightful and painful films about the past are not now what is good on the ideological plate. But government is government and government comes and goes.”

The EFAs take place every second year in Berlin — and, between times, they travel. The event has been held once before in Poland, in Warsaw in 2006, and next year will mark the 30th anniversary of the event.

“It made a lot of sense to co-operate with Wroclaw and have the awards there,” says Pascal Edelmann, head of press and public relations of the European Film Academy. “Bringing the awards there will mean the international film community is aware of the city.” He adds that Wroclaw is very friendly to film-makers.

The awards ceremony will be watched by millions across the world. “It is a very prestigious film event that is important for Wroclaw,” says New Horizons public relations manager Agata Burdzy.

Over the course of 2016, local tourism has shot up as a result of the city’s status as European Capital of Culture. The hope now is that the EFAs will help boost film production in the region too. Poland does not yet have a soft money scheme, but there is significant funding available for international productions. The international directors, producers and stars who come to the EFAs will realise very quickly just how much cinema means to the city. Some, at least, are likely to come back, either to present their films at New Horizons or shoot a project in Wroclaw.