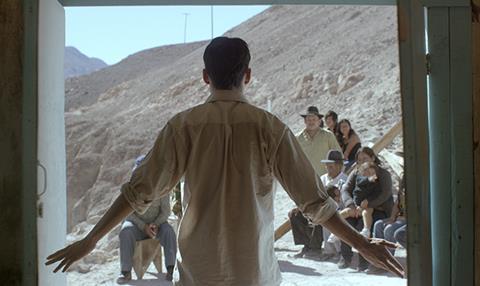 Venice Film Festival artistic director Alberto Barbera says that Christopher Murray will be the ‘discovery of the festival.’

Michael (Silva) believes he has experienced a divine revelation in the desert, but is taken for the village fool by all he tells. When he hears about an accident involving a childhood friend, Michael ventures on a barefoot pilgrimage through the Chilean desert.

Murray, who was born in Santiago, Chile, in 1985, previously co-directed Manuel de Ribera alongside Pablo Carrera. The film premiered at the Rotterdam Film Festival in 2010.

Murray is also the co-founder of the documentary project ‘Film Map of a Country’, which had its international premiere at the 2012 IDFA Festival. Murray was also General Director of the multi-award winning collective documentary Propaganda. The Blind Christ is his first feature film as sole director.

Why were you interested in making a film about a Christ-like figure?

Really, I am interested in how religion or spirituality or faith is a way for people to give sense to their reality.  The film is about the construction of this religious myth, in the figure of the Christ - this Chilean Christ - that makes this journey through the desert, and how this journey into faith resounds in the people of North Chile.

Let me be clear, the film is not about these mining companies, it’s about the atmosphere of development in Chile. The economic development doesn’t help the reality of these people and there are a lot of poor people who are suffering. The idea of the film is to journey to this part. The mining companies are just the general context hiding in the body of the film. But the main part of the film is about the relationships between Michael, the character, and the real people used in the film. So more then an explicit political statement, it’s more about how this impacts in daily life in the private spaces and in the belief of the people.

Apart from Michael Silva, you mostly use non-professional actors, people that have been directly affected by the changes in northern Chile. How did you mix fact with fiction?

The film is a fiction that it is like a parable, it’s in the language of the parable, it doesn’t try to be realistic. The main thing is that all the people who participated in the film are invited onto the film to create a character based on their own experiences, on their own lives. It’s in their own language.

How did you get to know these stories?

The way we worked was to spend 2 years there, in the fields, knocking on doors, collecting their experiences. There was a whole project of having a creative space and allowing these people to participate in the rewriting of the script, designing the characters in it, working on this dialogue and the places. Yes, in a way the film is a fiction, but it’s working together with the people to create a real natural environment in this story.

Was it more difficult to direct the non-professional actors than your work with Michael Silva?

No. It was an incredible experience. I’m convinced that when people have had a very strong story in their life that they are very confident people, They can communicate, they can create and it was amazing. I was completely surprised by how good and how natural and how strong the performances are of the real community, of the real characters that appear in the film.

Was there any directors or other films that inspired you in the making of this film?

Yes, I think of directors like Glauber Rocha, the Brazilian filmmaker for example,  he also introduces political concepts in a really unique language of film. All the films of Pedro Costa, the Portuguese filmmaker. From the film canon, filmmakers, like Robert Bresson. I think they are an inspiration in the way they build a language to try and get inside reality, not in a common way, not in any explicit way, but by creating a language to get inside the real realities.

What budget did you have for this film?

I don’t have a specific budget, to be honest. The film is produced by Jirafa [headed by Bruno Bettati] and also Cinesud, so the film is a Chile /France coproduction. We received funds from Chilean Fondo de Fomento Audio (audio promotion fund) and the Cannes Cinefoundation.

How do you feel about Mr. Barbera predicting that your film will be the ‘discovery’ of the festival?

To me I really feel grateful. For me it’s important to share the film, for me that’s the most important thing, not just the idea of being at the Venice Film Festival but to share our film. That is why films are made. And it’s great to be in competition alongside all these filmmakers that I really admire.

Chilean cinema has had a lot of success recently? Where do you see yourself as part of the Chilean film community?

The national Cinema in Chile has a lot of new voices: a lot of voices that are completely different, one from the other, there is not a national cinema language, it is a period of trying to make new films to experiment, and to have different voices. I feel very enthusiastic about things in Chilean cinema and I think it’s important to continue working so that this is not something that is temporary but there is something that is strong and structural to make Chilean Cinema really part of the world cinema. I think it is happening because of the efforts of all the actors in the little Chilean cinema world.