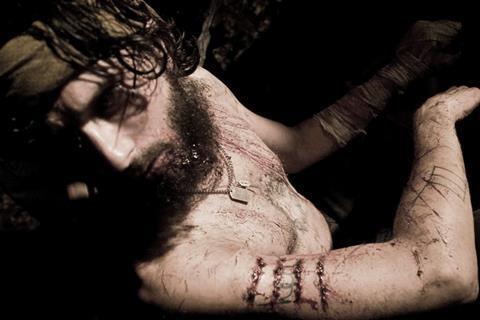 White Lightnin’ is Dominic Murphy’s fictional tribute to the dancer and violent career criminal Jesco White; it manages to include every negative stereotype about White’s native West Virginia which won’t make the viewer want to visit anytime soon.Tailor-made for the global midnight movie circuit, White Lightnin’ may be destined to stay there unless an enterprising distributor gives it a run with the young horror audience or the tiny niche market of fans of White’s mountain dancing. Far too violent for the American heartland it tries to depict, its curio value as a hillbilly slasher saga made by Brits could see some movement on the home video front.

White, the child of the mountain dancing star D. Ray White, was a boy addict whose drugs of choice were gas and lighter fluid. Reform school, a lunatic asylum and prison teach dancer Jesco (Hogg) how to fight, and he battles with his peers, his older wife Cilla (Fisher), with the killers of his father (Watson) and, most violently, with his own demons.

A commercials director, Murphy directs this as an alternative to the Flashdance formula in which a gifted dancer flees her rust-belt factory town origins for opportunity in the big city. In the redneck-exploitation script by Eddy Moretti and Shane Smith, White stays true to his dirt-poor backwoods origins, and never leaves, except for stints in prison. He also never backs down from a fight, even with his wife.

The film shows scant interest in establishing the facts of Jesco’s life for the audience that doesn’t know him (presumably they can check out the 1991 PBS documentary Dancing Outlaw), but lurches from one burst of trailer-trashing rage to the next.

As the action shifts back and forth in time, cinematographer Tim Maurice-Jones shoots key moments in sepia tones which replicate 19th century photographs or fix on details of the landscape, giving the picture an unexpected contemplative lyricism between Jesco’s arias of violence.

Hogg gets the accent right as the adult Jesco, who meets and falls for wife Cilla when he and his pals plan to hijack her car to get to a party. He also dances convincingly to traditional tunes and to the music of Nick Zinner.

As Cilla, Carrie Fisher is another unlikely casting choice. Still, she fits gamely into the odd mix fashioned by Croatian production designer Ivo Husnjak to look like the kind of West Virginia museum that you might find in Croatia, where parts of White Lightnin’ were shot.