Documentary commissioners look for heroes and hope in migrant crisis 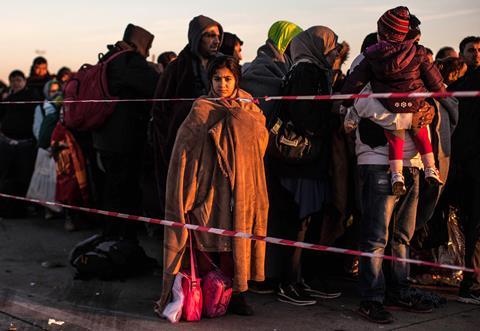 The challenge of finding new compelling ways to cover the European migrant crisis was at the heart of a panel discussion at Sunny Side of the Doc this week in La Rochelle, France.

The large number of migrants entering Europe in 2015 has prompted a wave of documentaries and factual TV series in recent months.

But as the crisis drags on with no end in sight, refugee fatigue risks setting in as audiences become immune to images of capsized boats and makeshift camps.

Diego Bunuel, head of documentary at Canal+, which is a co-financier with the BBC on the upcoming Exodus: Breaking Into Europe [pictured] by the UK’s Keo Films, said filmmakers needed to go beyond documenting the reality of the crisis.

“Our responsibility as moviemakers, responders or commissioners is to make something that does more that just say, ‘look something horrible is happening’,” he said.

“I don’t want to sell it as migrant film,” he added of Exodus. “It’s an epic film about man’s ability to survive, about how we as the collective human race are capable of doing anything.”

“You need to tell stories which move the crisis forward because sometimes it can seem so overwhelming and entrenched,” she said. “If you can’t offer some hope or heroes you at least need to enable the audience to come away with something that they feel they can do.”

Canal+ previewed a two-hour version of Exodus - which it is due to air in a primetime slot on Canal+ this autumn - in Sunnyside’s Grand Ecran screening programme aimed at the public.

A three-episode version will air on the UK’s BBC2 this summer after its originally scheduled June slot was postponed until after the UK’s EU referendum on Thursday (June 23) for fear it could influence voters. That version will also air on Canal+ sister channel Planete+.

A powerful, humanising work, it follows half a dozen characters through a combination of user-generated footage and interviews at different stages of their journeys with professional film crews.

“We met 76 different characters before they set off and gave them cellphones capable of recording. We didn’t know what would happen to them. Some made it; some got stuck, some turned back, some, we never heard from them again,” explained Bunuel.

Those making the cut include an 11-year-old Syrian girl travelling with her extended family; an urbane, English teacher from Damascus, who got on the wrong side of the Bashir Al-Assad regime; an ever-optimistic young Gambian man, sent to Europe by his widowed mother; and four Afghan sisters who flee Kabul after the death of their parents leaves them at the mercy of unscrupulous, reactionary uncles.

In a similar vein, Stefan Pannen of German company Berlin Producers presented #MyEscape in which migrants who have made it to Germany recount their journeys through the footage on their own phones.

Pannen said the production had also considered equipping migrants with phones but shied away from the idea on the basis that they might be encouraging some to travel.

“We asked ourselves,’What happens if one of them dies?’,” he said.

Bunuel said it was a legitimate question saying that French media had questioned the approach of Exodus when he first announced the project.

“The reality is that our job is to tell stories,” he said.

Citing Stalin’s quote: “A single death is a tragedy; a million deaths is a statistic,” he added that the aim of Exodus was to give a voice to the anonymous faces appearing on nightly news bulletins.

“It’s a story which puts you in their shoes in the first part as they make their way to Europe. But they once they make it and have another 10 countries to pass through, the film puts a mirror in front of you because you realise that you’re complicit in not doing anything - you’re responsible.”

By chance, the Sunny Side debate ran the day after the UN refugee agency UNHCR unveiled new figures showing a record 65.3 million people were registered as displaced due to conflict or persecution in 2015, the highest number since World War Two.

Within this figure, 23.1 million people were classed as refugees - half of them hailing from Syria, Afghanistan and Somalia.

With the crisis still in full swing another wave of documentaries are currently in the works or due to hit screens.

New refugee-themed films in the Sunny Side catalogue included Barcelona-based Boogaloo Films’s Amal about former Syrian football coach Osama A. Mohsen whose attempt to cross the Hungarian border with his young son in September 2015 hit the global headlines after footage of him being deliberately tripped up by a local camerawoman went viral.

Other titles included French film director Anne Poiret’s recently released Welcome to Refugeestan looking at life in UNHCR camps around the world which are home to some 16 million people.

Danish producer Monica Hellstrom of Final Cut For Real - the Copenhagen-based company which produced Joshua Oppenheimer’s The Act of Killing and The Look of Silence - was in La Rochelle with Flee. Directed by Danish director Jonas Poher Rasmussen, the animated documentary follows a successful gay man of Afghan origin coming to terms with his teenage experiences as an unaccompanied minor arriving in Denmark alone.

“That the market is flooded with migrant documentaries I completely agree but I think we need to keep discussing this even though it’s unpleasant and difficult,” said Hellstrom.