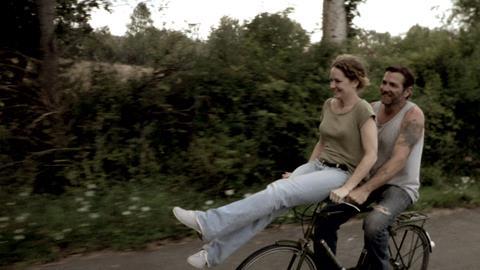 Take a Sundance-style no-frills movie about a woman starting life over after prison, and cut its budget by 90% and that’s the pretty much look of Francine, starring Melissa Leo.

Francine proves that less can be more.

This portrait of a struggling soul by Brian M. Cassidy and Melanie Shatzky has a garage-film purity and a dark view of American marginalia that could strike a chord in Europe. Leo in the lead will drive Francine more deeply into the marketplace, though life after festivals and an eventual art house release could also be in film schools, as a manual for budget minimalism.

Francine (Melissa Leo) is released from prison for a crime that’s never disclosed. To the tune of annoying music, she stumbles through several jobs  involving animals - from a pet store to a vet’s office. It seems that we’re back to the template of numbing loser angst in drab settings.

Yet Francine proves that less can be more. Writer/directors Cassidy and Shatzky have found a bare-boned realism here, beginning with a full-frontal nude shot of Leo in prison that her publicist would probably order burned.

Cassidy and Shatzky don’t take the path into magic realism, cloying quirkiness or Mumblecore mannerisms that many indies might. Instead, we see a character take shape and come unhinged in utterly believable circumstances – from the everyday frustrations of working in a pet store to the burning of euthanised animals that are kept in a veterinarian’s deep freeze until cremation.

The filmmakers don’t seem to be playing for laughs, but the black humour tugs at you.

The key to that tone is Leo, who plays with an absolute deadpan until she’s in contact with the animals that she loves. The performance does not call for the horror of Charlize Theron’s self-transformation in Monster, but without makeup or much of a wardrobe or many spoken lines, the Oscar-winning Leo (Supporting Actress for The Fighter) probably won’t turn this role into a Vogue spread.

Still, as a 74-minute snapshot of an American at the low end of the struggling 99%, it speaks far more eloquently than poverty statistics.

Leo’s Francine lives at the edge of society where the glass is always half empty, except when she feeds the animals who transform her humble house into an unruly hamster cage on growth hormones.  The interiors make those in The Fighter look like Beverly Hills.

Things do get odd – when Francine washes a kitten’s paws with her tongue or shaves an anaesthetised cat, which looks like a stuffed animal, before an operation in the vet’s office – but the film’s charm is that it does not labour to charm its audience.

Production values are austerely solid for the down-budget project. Cassidy, also the cinematographer, beats the logistical odds with close handheld observations that capture Francine in her world, whether she’s lying on the floor with dogs or in a rowboat in the middle of a lake.