GI Joe: Rise Of The Cobra 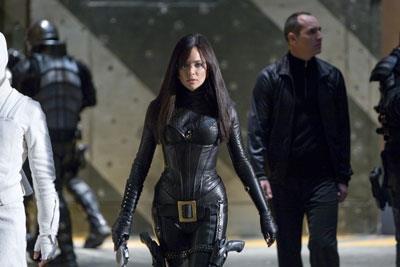 The last big tentpole picture of the summer, opening in North America on Aug 7, is a bang-em-up action adventure stirring traditions from the James Bond, Mission: Impossible, Bourne andNational Treasurefranchises into a cheesily fun new blockbuster brew. An ambitious attempt by Paramount and Hasbro to bring the GI Joe action figures to life after the success of Transformers, the resulting film is unpretentious popcorn entertainment which delivers the goods and should be a sizable hit.

Domestically, where awareness on the brand is high, the film should perform to big summer numbers. Internationally, the character never really travelled - Hasbro redubbed the action figure Action Man in the UK and Australia - so PPI faces initial challenges in spreading awareness and want-to-see for the title. But the studio has smartly done everything to make that takeup in lucrative international markets a fast one. Shot in the Czech Republic, the film has only a couple of scenes in the US and a multi-national cast. European audiences should respond warmly to the concept and local stars like Sienna Miller and Said Taghmaoui in leading roles. With Harry Potter fading off the markets, GI Joe should carve out a large slice of the global box office for at least a couple of weeks.

GI Joe is directed by Stephen Sommers, whose credits include the first two Mummy films and Van Helsing, and it is his most solid to date, achieving a more engaging balance of action, comedy and romance than his puerile Mummy reboots.

Although GI Joe was created in 1964 as an action figure, an entire mythology was developed for the 155-issue Marvel Comics series in which GI Joe evolved into a team of super-elite soldiers from around the world fighting the evil Cobra organization. The film, which includes all the characters from the GI Joe universe, is less an origins story (a la Wolverine or Batman Begins) as a standalone action film explaining the origins of Cobra and the arrival in the unit of Duke and Ripcord.

A prologue in 1641 features David Murray as James McCullen Destro, a Scottish man who has been selling arms to both sides in the English Civil War but who is branded with a iron mask soldered onto his flesh when he is caught. The film moves forward to present day when an ancestor of McCullen - James McCullen (Eccleston), head of the arms manufacturer MARS, has just clinched a deal with the US government for four potentially devastating warheads.

But as an army unit led by Duke (Tatum) and Ripcord (Wayans) is driving the warheads from MARS headquarters in eastern Europe, the convoy is ambushed by a crack team of armed warriors including the glamorous Baroness De Cobray (Miller, sashaying her way through the bad girl role with aplomb) who happens to be Duke’s former fiancée. Just as the Baroness is about to make off with the warheads, soldiers from the GI Joe force (or “Joes”) arrive to save the day. Duke and Ripcord are taken to GI Joe headquarters in an underground complex called The Pit in the Sahara Desert. There they meet the head of the Joes General Hawk (Quaid).

They are trained to enter the GI Joe team and meet other members such as Scarlett (Nichols), Snake-Eyes (Park), Heavy Duty (Akkinuoye-Agbaje) and Breaker (Taghmaoui).

But just as they are accepted into the unit, the Baroness and her sidekick Storm Shadow (Lee) break into The Pit and steal the warheads. Backed by McCullen who has diabolical plans to conquer the globe, they set about detonating one of them.

As peopled by so many characters, the story never touches on any one with more than a two-dimensional brush stroke, although a couple of juicy back stories and romantic subplots will help to keep the audience invested in them.

Sommers focuses on action all the way through, most notably in a spectacular chase through the streets of Paris as the Joes pursue the bad guys intent on bringing down the Eiffel Tower. The chase seamlessly mixes real life stunts with CGI, a trademark of Sommers’ previous work and this film in particular.

The film is left wide open for a sequel; indeed the film-makers appear so confident in that prospect that one of the key plotlines here is left hanging.