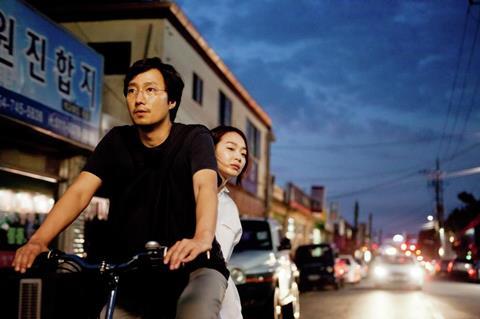 Thoroughly absorbing and beautifully captured, Chinese-Korean filmmaker Zhang Lu’s Gyeongju is a slow-paced but fascinating look at a man’s journey as he looks for a painting he once saw at a café in a picturesque city called Gyeongju.

It is a shame the film drags in the final twenty minutes as it begins to outstay its welcome, but it nevertheless remains a captivating and stimulating feature.

Having made its international premiere in Locarno and continues its strong festival run in Toronto where it’s making its North American premiere in the City to City programme, distributors searching for a strong independent Korean film may also take notice, but the unnecessary long running time could hinder its reception as seen with its disappointing domestic box office run where it generated a lackluster 63,000 admissions ($460,000) on 318 screens in June despite the leading presence of local stars Park Hae-il and Shin Min-ah.

Park Hae-il plays Choi Hyeon, a Beijing-based Korean professor who returns home to attend a friend’s funeral. He’s then reminded of a trip he once made to Gyeongju where he saw an obscene painting in a café and decides to go to the café in the city to see if he can find the painting again only to discover it’s no longer there. He leaves disappointed, but begins a series of interesting encounters, and later returns to the café where he and the new owner called Yun-hui (Shin Min-a) begin an unexpected journey.

Interestingly, Zhang adopts a realist aesthetic through the use of the long take and often places the camera quite far back – a trait adopted by other filmmakers such as Lee Chang-dong and Im Kwon-taek, but it’s Hong Sang-soo that may provide the more suitable comparison given how Hong will often focus on a filmmaker or professor on a journey of unforeseen and awkward encounters.

The film’s narrative is also reflective of Richard Linklater’s Before Sunrise, Before Sunset and Before Midnight films. Zhang, however, is able to make this feature his own. The film’s unique setting and aesthetic provide the idyllic backdrop that Zhang successfully exploits fusing both tradition and contemporary life along with its struggles, while also not making it overly serious setting it apart from his other features, as seen with the more humourous encounters that includes some Japanese tourists, along with a Ryoo Seung-wan cameo who directed The Berlin File.

Shin Min-ah (A Bittersweet Life) who hasn’t appeared in a significant number of films has chosen wisely to be part of this production as her understated and calculated performance brings out the best in her. Park Hae-il (The Host) too is a perfect fit for the lead as the charming and handsome professor.

It is a shame the film drags in the final twenty minutes as it begins to outstay its welcome, but it nevertheless remains a captivating and stimulating feature.