I Am Not Him 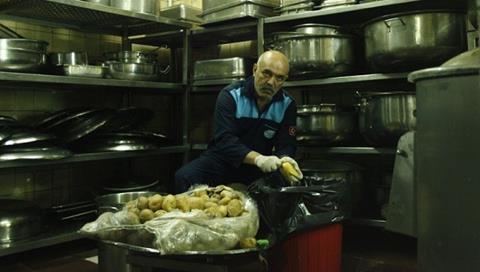 The winner of this year’s Best Picture, Best Script and Best Music Awards at the Istanbul Film Festival, this meeting between two doppelgangers taking place in the imagination of a gruff, solitary, middle-aged dishwasher during a night he spends in jail, is just the kind of film that will charm festivals, invite analysis galore, find slots in most art houses around the world but will likely put many audiences off with its slow pace, frequent repetitions and extensive, less than essential, running time.

I Am Not Him (Ben o degilim) is the grimly obsessive story of a man who tries to escape his bland, unexciting identity only to find another, equally unexciting, one to put on, Pirselimoglou’s film relies to a great extent on the presence of the most interesting personality to hit the Turkish screens in recent years, Ercan Keysal (Once Upon A Time In Anatolia, Mold, Yozgat Blues), for whom the lead seems to be a natural extension of all his previous parts and fits him like a glove.

She invites him for dinner, he hesitantly accepts and once at her place, discovers her absent husband, Necip, is a spitting image of himself. The difference between them lies in Necip wearing glasses and Nihat sporting a bushy moustache. After the first dinner, there are more to come - soon Ayse shares her bed and her husband’s car with Nihat, and they are almost husband and wife (a concept that Nihat is reluctant to accept) when one day they go to the beach and Ayse disappears.

This is the first step towards Nihat’s transformation, first subconscious and then fully conscious, into the spouse of the woman he lost. He leaves his work and all his friends, assumes the identity of Ayse’s husband, Necip, shaves off his moustache, pretends to have escaped from jail, claims to run away from the police, moves under his new identity to another town but to the same kind of existence he had before. There, on the street, he meets a prostitute who is the spitting image of Ayse (played once again by Zaree). They hook up again and live together pretty much as they did before until he is identified on the street as the jailed Necip, and captured by the law.

For all purposes, Pirselimoglou’s film could be another version of Pirandello’s The Late Mathias Pascal in the way it deals with changing identities, but in a vastly different manner and with a completely different social and psychological background. Not to mention many other film and literary explorations of the same theme.

But his script covers also such well-established notions as the similarity between husband and lover or between wife and whore, makes a pass at portraying the male supremacy attitude of the Turkish men and there is even a reference to the acting profession, which will never be more than a fake copy of life. That should explain Pirselimoglou’s own predilection for understated, largely subdued performances.

Faithful to his reputation for making slow films with minimal dialogue, low key characters and fixed camera angles, Pirselimoglou’s film deploys here the same kind of visual language that established his reputation. Andreas Sinanos, the cinematographer on all the late Angelopoulos films, provides meticulous camera work (one wonders how he adapted from Angelopoulos’ long, elegant travelling shots to the immobility of the camera in this film) and Zaree handles her ambiguous double role with quiet assurance. It is only a pity that this interesting, even if not entirely original premise, tends to wear itself out by the end, insistently restating itself and leading to a cop-out finale, far too easy for the ambitions it suggests.