I'm Carolyn Parker – The Good, The Mad And The Beautiful 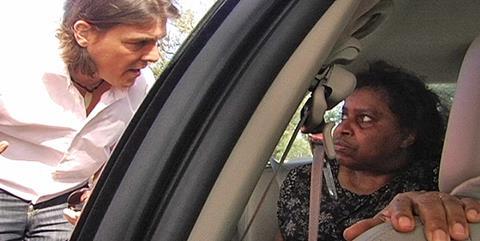 An hymn to the indomitable greatness of the American spirit, Jonathan Demme’s documentary on the last woman to leave her ruined house after the Katrina Hurricane wiped out large parts of New Orleans and the first one to return and build it back again, is just the kind of shot in the arm needed right now by the troubled Barack Obama supporters to justify everything they believe in.

Briefly, here is every qualification needed for the perfect American.

Held together by the ebullient, invigorating personality of a 60 year-old woman who takes every obstacle in her way as another challenge for her natural undefeated spunk, this account of her successful struggle to restore her wrecked home to its initial condition is bound to go a long way, not only in festivals and specialised distribution but also as an inspirational piece for frequent television broadcasts as well.

Avoiding all the predictable preachy speeches about government neglect and corruption usually associated with the subject, Demme chose to follow Mrs. Parker for no less than five years, from the moment she had to be evacuated from the wreck of the house she used to live in, through the long period she was lodged in a trailer as repair work was proceeding, stalling and then proceeding once again, until she finally marches back into it, glowing and victorious. Black (though she tells Demme her father was Mexican), overweight  but constantly on the move, washing, cleaning and cooking for her family, always alert and ready to take a stand, she is proud of her older son who has already graduated college while the younger daughter, still at home to help her mother, is following in his steps.

She lobbies for the restoration of her community church, St. David, “the only one for Black Catholics”, which risks being passed over for St. Maurice, a swankier establishment catering to white people, she grieves the destruction of her old neighborhood, she fights a crooked contractor who won’t complete the job he had committed for, she reminisces about the segregation (she still refuses to look at cotton fields) poverty (they used to eat rodents for lack of better meat) and seating arrangements on the buses, she jubilates with the volunteers working in her home.

In the course of the film, between one Demme visit and the next, she undergoes surgery on both her ailing knees and almost dies in the process (“I took a trip into the past” she playfully describes her many days in coma), followed by extensive re-education which puts her back on her feet. But never, at any point loses her faith or even considers giving up.

Briefly, here is every qualification needed for the perfect American, the one who believes in God and trusts in His work, a good person who gets mad (though not very often in the film) when crossed and is beautiful enough inside, to make you forget she is no movie star. She doesn’t need to be for she has a pair of expressive eyes that fill up the screen and make you ignore the rest, an utter ease moving in front of the camera and addressing it as if she hadn’t done anything else all her life and she has plenty to say.  Even the Katarina cataclysm and the appalling response of the Bush administration to it, could not daunt her spirits.