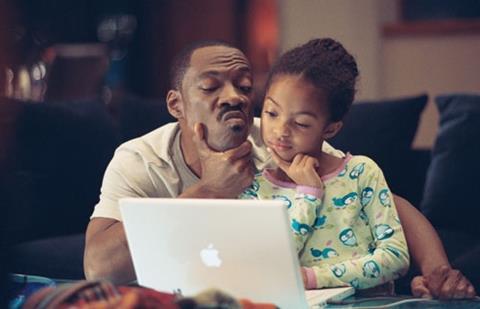 After flopping with last summer’s sci-fi comedy Meet Dave, Imagine That finds Eddie Murphy aiming to deliver the kind of tot-friendly family comedy that previously worked for him with Daddy Day Care and the Dr Dolittle films. But without the silly slapstick or cute effects that helped make those outings $100m-plus domestic hits, this sweet yet slight tale from Nickelodeon Movies would appear to have limited theatrical prospects.
Paramount opens Imagine That wide in North America at the start of the school holidays on June 12 (the same slot as both Dolittles opened), targeting younger kids and their parents. Although immediate competition will be light, the film could still be overshadowed by the summer season’s big animated releases. Internationally, a staggered release pattern may help Paramount make the most of the film, though its less visual comedy style could be a hindrance.
Murphy’s Evan Danielson is an up-and-coming financial advisor who, now that he and his wife are separated, finds it difficult to make time for his seven-year-old daughter Olivia (Yara Shahidi). When the princesses and queens of Olivia’s imaginary world start providing stockmarket tips that work in the real world, Evan starts to pay more attention. But when he needs Olivia’s ‘friends’ to help him beat a rival for a big promotion, he becomes torn between career ambition and parental responsibility.
The story’s moral – about the relative importance of family and work – is pretty clear, though it takes Evan a while to learn the lesson. What’s mostly missing from the script by Ed Solomon and Chris Matheson (who previously collaborated on Bill & Ted’s Excellent Adventure and its sequel) is effective comedy, either for adults or children.
There’s plenty of toilet humour here for the younger audience, but surprisingly little of the boisterous slapstick that enlivened Daddy Day Care. Adult viewers have to make do with a few mild laughs generated by Evan’s dealings with his strait-laced employers and clients and his annoying office rival, Johnny Whitefeather (Haden Church), who spouts fake Native American mysticism to back up his investment advice. Parents are also thrown a sop in the form of a handful of Beatles tunes re-recorded for the soundtrack.
The only genuinely funny or touching moments come when father and daughter get lost in play and Murphy taps into the inner child that has played a part in his humour since The Nutty Professor.
Again surprisingly - and in contrast to Adam Sandler’s somewhat similar Bedtime Stories from last Christmas - the film makes no attempt to bring Olivia’s fantasy world to life with special effects. Whatever the basis for this decision, it leaves the film feeling a little too understated to compete in the effects-heavy summer season and director Karey Kirkpatrick (the Chicken Run screenwriter who directed the animated Over The Hedge) struggling to create visual interest.
Murphy is hardly stretched by his role and it’s left to the always-reliable Church to do most of the comic work. Shahidi, who so far has appeared mostly in commercials but has a couple of significant features upcoming, is cute without being cloying. The supporting cast includes Martin Sheen as an avuncular investor and Nicole Ari Parker as Evan’s long-suffering wife.