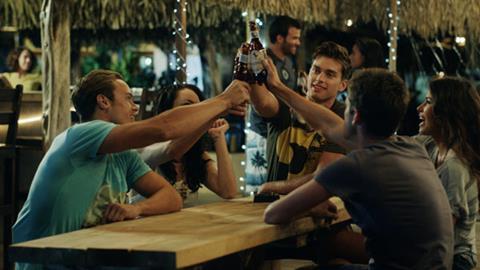 Good-looking-but-rather-vacuous-twentysomethings get bored with the beaches of Panama and head into a forbidden jungle in search of a waterfall. Indigenous offers up a standard genre plot - though the beach is actually far nicer than the waterfall, but then decision-making by buff types in horror films is never a strong point – and it comes as no surprise that there is something nasty lurking in them-there woods…and it is peckish.

While never truly terrifying, Indigenous is, however, made with a good deal of glossy style.

While the structure of low-budget horror Indigenous is so very familiar, it does try and throw in a few twists towards the end, and while the gore quota is relatively modest and it poses more questions than it answers it manages to be modestly entertaining, especially when the good looking gang hit the jungle and the bodies start falling. The film premiered at the Tribeca Film Festival.

She tells them about a beautiful waterfall deep in the Panamanian jungle, but her friend – and fellow surfer – Julio (Villaverde) warns them off, saying that access to the jungle is banned. Apparently even locals don’t go there because of the legend of the blood-sucking beastie, the Chupacabra.

So far so bad, and while the film takes a good 45 minutes to layer in some modest chills, things take a turn for the nasty when Carmen takes the fivesome to the waterfall and some rustling in the undergrowth suggests that the Chupacabra may be upping his diet from animal to foolish foreigner. As night draws in there is plenty of footage of screaming tourists as they dash through the jungle trying to escape.

The Chupacabra itself – when finally revealed – looks like a long-long cousin of the cavern-dwelling beasties in Neil Marshall’s The Descent…which seems rather odd. Quite why this pale-skinned nasty should be hanging out in the hot and dank jungle doesn’t quite make sense, so before you know it the filmmakers switch proceedings into the cave lair the Chupacabra calls home.

The film has an interesting twist in the final third as the media gets in on the act (computer whiz Scott managed to sent out a message on some footage before losing his mobile phone’s signal) and covers the nastiness via a helicopter, but while this does lead to some subtext about press intrusion and dubious media morality at heart the film just wants to get back the mild monster munching.

While never truly terrifying, Indigenous is, however, made with a good deal of glossy style, and though the performances are all one-note and the chills a little late on arriving, it has the genre chops to work as a well-made B-Movie.