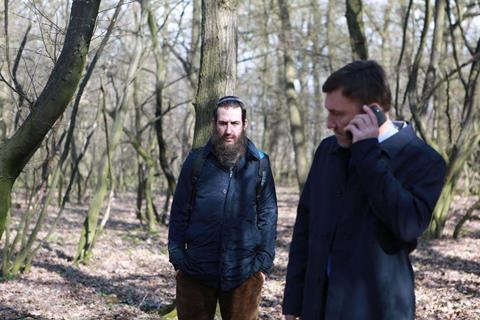 Israeli director Amichai Greenberg – who won best film at Haifa International Film Festival with his Holocaust legacy thriller The Testament – worked in real estate, directed commercials, and also made TV dramas and documentaries prior to embarking on his first feature.

“I did this in Israel around the year 2000. Over the course of three years, I sat in on a few hundred interviews, working on the cinematography aspect,” he recounts, speaking to Screen in Haifa.

Greenberg’s debut film revolves around senior Holocaust researcher Yoel, played by Ori Pfeffer, who is investigating a massacre of Jewish people on the outskirts of an Austrian village during the Second World War.

Regarded as an oddball at the Jerusalem Holocaust research institute where he works, where his strict Jewish orthodoxy sets him apart from more secular colleagues, Yoel’s investigation uncovers by chance a life-changing secret harboured by his elderly Holocaust survivor mother that throws his very identity into doubt and gives his quest for the truth an added personal dimension.

The feature was shot between Israel and Austria with the ultra-modern Van Leer Jerusalem Institute appearing as the offices of the fictional Holocaust research body.

“The organisation in the film is a sort of composite of various bodies doing this work. In the beginning, I asked Yad Vashem if they would allow me to shoot there,” says Greenberg, referring to Israel’s official memorial to the victims of the Holocaust. “Without even seeing the script, they said they don’t collaborate with any fiction films.”

Yoel’s search for the truth plays out on one level as a traditional investigative thriller. “I wanted to make a project about the Holocaust but it goes beyond that. It is such a charged topic and I didn’t want to impose it on the audience. I wanted to go sideways. I wanted to present it as a thriller,” explains Greenberg. “My real motivation was to deal with someone reaching a ground zero in his life.”

“The other motivation was that my father is a Holocaust survivor. I grew up in a household where everything seemed normal but I always felt something was wrong although I could never put my finger on it. It took me a long time to figure out what was lacking. It was an essential presence. My father was there but he wasn’t there. I wanted to tap into that ‘silence’.”

Beyond the question of Yoel’s Jewish identity and heritage as the son of a survivor, Greenberg says the film also feeds into a wider discussion about identity and its foundations. “This question of identity and who we are is rising now. You see it in Catalonia, in Brexit, in America. You have these extremes of very liberal and very nationalist,” says Greenberg.

The feature is produced by Yoav Roeh and Aurit Zamir at Jerusalem-based Gum Films with Sabine Moser and Oliver Newmann of Vienna-based Freibeuterfilm on board as co-producers. Rome-based Intramovies handles international sales.

Having premiered in Venice’s Horizons sidebar and now awarded Haifa’s top prize, The Testament next plays Busan, Warsaw and Cape Town with other festival dates to be announced.

Greenberg is also working on the screenplay for a second feature, which will revolve around a top scientist who retires from academia to become a maintenance worker because he feels science circles have become too far removed from reality. When he is approached by his ex-wife to sign papers committing his estranged, suicidal son to a psychiatric hospital, he decides to take him instead to the desert.

“It will be a homage to Zen And The Art Of Motorcycle Maintenance, a book I love. I plan to finish the script in the next three months and shoot within 10 months. It will be low budget and perhaps shot on an iPhone.”