The Emmy-winning creator of Transparent won the directing award at Sundance 2013 for her debut feature Afternoon Delight and talks about her return to Park City with the first three episodes of the Amazon Studios series I Love Dick. 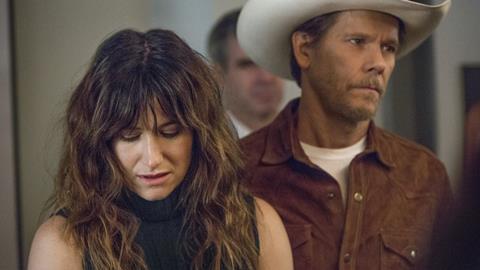 Comedy-drama I Love Dick premiered in Park City on Monday and stars Kathryn Hahn and Griffin Dunne as a struggling couple who develop a fascination for Kevin Bacon in the titular role as an enigmatic professor.

Soloway co-directed the series with Andrea Arnold, Kimberly Peirce and Jim Frohna. Sarah Gubbins wrote the pilot episode for the Texas-based story, adapted from Chris Kraus’ 1997 cult classic that has been lauded by feminists across the world.

Soloway discusses the spirit of the Women’s March On Washington, the creative freedom afforded by Amazon Studios, and creating a show that eschews traditional gender roles and their representation on television. I Love Dick premieres on Amazon Prime on May 12.

Did you take part in the Women’s March that happened at Sundance?
I was actually in Washington DC for that. I took part in DC and it was unbelievable. Then I flew here Sunday.

How was that experience?
Watching these dark forces stand on the steps of the White House and watching Barack [Obama] fly away in a helicopter really felt like one of the low points of our country in my life. It’s such a scary feeling to watch this administration take over our country. I was kind of at rock bottom emotionally the day before. To get to DC and actually see some “Make America Great Again” baseball caps on the street and to be out-and-about with some of his revellers who were celebrating their victory was just so frightening and disheartening. I do believe that their celebration of their victory is a celebration of their whiteness and their maleness.

The next morning, to wake up and put on my pink hat and to go out into the city and see every single corner filled with hundreds of thousands of people who all felt the same, I think I started to believe that something good will come of this.

It seems like that was great momentum to take with you into Sundance. What is it about this festival that made it the right place to screen I Love Dick?
Yes, it was good momentum. I think we just dreamed of coming back here because in some ways this has been like my college. I came here with my first film. Of course, Kevin Bacon has been coming here for 20 years with his background of films. So, we look at Sundance as the place [that welcomes] revolutionary outlier artistic perspective. It really celebrates the smaller things; things that are smaller on paper but have the potential to really change culture. Sundance is a fantastic way to be able to name and frame all of this culture change.

How did the novel come to you and what about it made you want to turn it into a show?
Sarah Gubbins is my co-creator. She found an interview about Chris Kraus in the New Yorker about a year and a half ago and it was about the book I Love Dick, which we hadn’t heard of. As soon as you hear there’s a book called I Love Dick and that it’s a feminist cult classic that you somehow missed, you just go crazy, which we did.

We started to research what the book was about, which is a real woman named Chris, who had a real crush on a guy named Dick, and a real husband named Sylvere, where they really were attempting to – at first, through fantasy and then through reality – incorporate his dick-ness into their sexual life and their spiritual life. They realised that worshipping him together gave them back their sex life.

So, for me a very simple story that I’ve never seen done before is just like heaven. This is a story of a couple who kind of stop having sex and then this other man reawakens them. For me, a heterosexual man being able to talk about another heterosexual man with his wife in this sexual way, I’ve never seen. It seems like total taboo for American culture.

Where do you take creative licence that strays away from what the novel did?
We take a lot of creative licence. I think besides having this really juicy story about a love triangle, they really wanted to take this idea of intersectional feminism and imbue it across the whole season where Chris [opening up] to her own artistic voice ends up causing trouble for a bunch of other women in the town and women who are very different from her; a woman of colour, a queer woman, a Latina, who have their own stories and their own reasons to want to bombastically break free from the expectations of their gender.

We just really wanted to go beyond the myopia of the novel, which is just deeper and deeper into Chris’ discomfort and desire, and spread it out into all the different women in the town. We want this show to operate sort of like a sleeper cell out in the world; that people will [find it] on Amazon having no idea what they’re looking at. Maybe they like the title I Love Dick, maybe they’ve always had a crush on Kevin Bacon. They pop it on and suddenly they’re being radicalised from inside their television, which is an idea I love.

Why was Amazon Studios the right place for this project?
I love the guys at Amazon. I love what they’re doing. I love how [Jeff] Bezos is really reinventing and disrupting all different kinds of industries. For us, the set feels like we’re making an independent film. We don’t have that feeling of the network or the studio, or anybody, standing at the monitors with their arms folded and saying, ‘Make her more likable.’ That’s the kind of thing that you would get at a regular network or maybe even at some cable networks where there are mostly men in charge. They’re always trying to make sure that women are seen through a lens that makes [men] feel comfortable. Even though there are a lot of men at Amazon they are fantastic and they are liberal and they believe in this revolution and they use some business principles that really do allow for a huge amount of independence and artistic freedom.

How did you get Kathryn Hahn and Kevin Bacon attached to star?
I’ve known Kathryn Hahn for a long time. We wrote this project specifically for her. I always say in Hollywood you ride the horse in the direction it’s going and you, at least, can tell when something is right it’s right and you just kind of go with it. In this case, the second Kevin Bacon’s name came up it was perfect. In many ways he’s a lot like Dick, because people project things out to Kevin Bacon the same way they do to Dick. Like, the whole [six degrees of Kevin Bacon thing] – it means something and even Kevin himself doesn’t really understand what he means to other people and I think Dick feels very much like that.

What was it like having Andrea Arnold and Kim Peirce on the set helping to bring this world to life?
For me to have Andrea Arnold on the same set is a dream come true. She’s my directing hero. She’s one of the people that made me want to be a director in the first place; just wanting to make something like [Arnold’s] Fish Tank. To be able to have a nearly all-female directing team, and Kim Peirce as well – another hero – and for us to take turns on scenes and episodes and to really co-create this together and just over and over asking ourselves, ‘What is the female gaze? What does it feel like? What does it look like?’ We were in this mysterious experimentation of asking ourselves and the camera, what does it mean to see through a female lens when we’re so used to being seen; we’re so used to being looked at. It’s really become this revolutionary journey for all of us. Just understanding what it means to become.