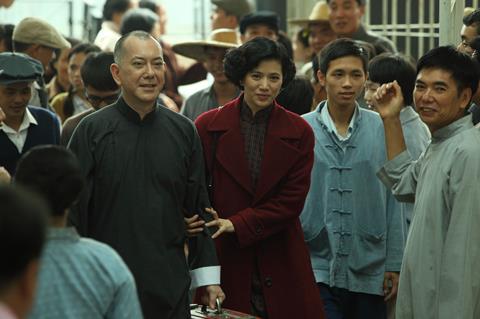 Although few people other than martial arts aficionados knew much about him before 2008’s Ip Man, the Wing Chun master who counted Bruce Lee among his protégés has already headlined five movie outings since, with Ip Man - The Final Fight following hot on the trails of Wong Kar-wai’s The Grandmaster. In a programming decision that seems to speak more about the movie’s local sentiments than its artistic idiosyncrasies, Herman Yau’s action drama premieres as the opening film of the Hong Kong International Film Festival on March 17, before receiving its domestic theatrical release on March 28 and its European premiere at Udine’s Far East Film Festival in April.

The soul of this movie is really in its tireless references to the historical and social conditions of 1950s and 60s Hong Kong, whose street views are recreated in vibrant, saturated colours.

With its chronically nostalgic tone, The Final Fight sometimes plays like Echoes of the Rainbow (2010) featuring Ip Man. A watchable if far-from-memorable view on the character’s later years, the movie is indeed the second take on the legendary figure by the prolific Yau.

If his clearly fictionalised The Legend is Born – Ip Man (2010), which features real-life kung fu champ Dennis To in the title role, is a fluffy crowd-pleaser that functions more or less as a prequel to the other recent Ip Man biopics, the new movie may be regarded as a sequel of sorts to all the rest, as the filmmaker casts his regular leading man Anthony Wong as an ageing master living a tough but dignified life in the turbulent post-war Hong Kong.

While Yau and Wong first established their cult status together with such 1990s horror classics as The Untold Story and Ebola Syndrome, the actor’s rather human portrait of Ip Man couldn’t be further apart from those crazed, early roles. Sporting a Foshan accent that inevitably reminds a Cantonese-speaking audience of his hilarious voicework for the McDull animation franchise,

Wong nevertheless lends a new dimension to the grandmaster as he mentors his eclectic group of students (Jordan Chan, Gillian Chung, among others), finds an unlikely partner in a beautiful songstress (Zhou Chuchu) after the death of his wife, and finally fights his way into the Kowloon Walled City to save a student from a mythical fighter-cum-criminal kingpin (Xiong Xinxin).

Much early buzz surrounded Wong’s mid-film, closed-door fight with fellow Infernal Affairs alumni Eric Tsang, the former stuntman, now-iconic comedy actor who’s here playing a rival-turned-ally at the helm of the White Crane school of martial arts. But the soul of this movie is really in its tireless references to the historical and social conditions of 1950s and 60s Hong Kong, whose street views are recreated in vibrant, saturated colours.

The character of Bruce Lee does show up briefly in the last reel, though the cameo – which largely obscures the character’s face and shows him as something of a Westernised, prodigal son opposite Ip Man’s humble presence – is unlikely to impress many of his fans.

Despite its title, The Final Fight is arguably the least but certainly not the last we’ll see of Ip Man on the big screen: the 3D final chapter of the Donnie Yen-starring, Wilson Yip-directed Ip Man trilogy is expected to wrap filming within the year.