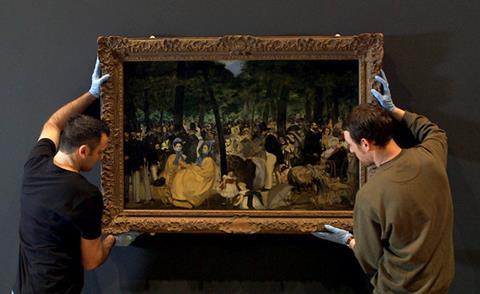 The art exhibition as a big screen documentary experience is part of a fresh way of letting art lovers get up-close-and-personal with some of the world’s sell-out exhibitions, and while it might lack the sheer tangible experience of being there in the gallery and seeing  the impact light and ambience on a classic art work, it is an intriguing platform screening experiment in opening up the art exhibition world.

Nicely shot and easy to watch, the film is an easily accessible documentary that could appeal to Manet fans, and especially those who just can’t make it to the gallery.

Manet: Portraying Life is a recording of the Royal Academy of Arts sell-out exhibition, the first ever  retrospective of the portraiture work of Edouard Manet, bringing together works from across Europe, Asia and the US. There will be a series of one-off platform screening of the film in the UK and around Europe, and while clearly linked to a one-off exhibition, presumably the film is also available to television arts channels.

The exhibition itself consists of more than 50 works, including portraits of his most frequent sitter, his wife Suzanne Leenhoff; luminaries of the period such as Antonin Proust, Émile Zola and Stéphane Mallarmé, along with scenes from everyday life, all revealing Manet’s forward-thinking, modern approach to portraiture.

The film, fronted by art historian Tim Marlow, also details behind-the-scenes footage of the exhibition’s preparation. This and details and precisely framed footage of the paintings themselves are interwoven with a nicely crafted biography of Manet and 19th century Paris as it stood poised for the coming of industrial advances.

The staging is very familiar. Marlow stands in front of a series of portraits and discusses them with a series of experts, in context of Manet and when he painted them and of the changes taking place in Paris. Royal Academy curator MaryAnne Stevens is especially fascinating as she details Manet and his work, while Lawrence Nichols from the Toledo Museum of Art, where some of the paintings come from, is engagingly enthusiastic. Actress/director Fiona Shaw is another intriguing choice as an interviewee, offering an ‘artistic’ response to the work (as do painters Tim Yeo and Tom Phillips) rather than one based on deep or academic knowledge of Manet’s work.

Nicely shot and easy to watch, the film – originated by Phil Grabsky Films – is an easily accessible documentary that could appeal to Manet fans, and especially those who just can’t make it to the gallery. It is clearly a niche market, but as event programming of opera or music events has already proven, if the audience is there it can work.